The present day 2nd Battalion, The Parachute Regiment, also known as 2 PARA was formed in July 1948 from the 5th (Scottish) Parachute Battalion.

(For further information on the 2nd Parachute Battalion which was formed in 1941 and amalgamated with the 3rd Para Bn in 1947 please click here.)

The battalion deployed for internal security operations with the 16th Parachute Brigade to the Canal Zone in Egypt during 1951-4. In July 1956 2 PARA was conducting anti-terrorist operations against EOKA in Cyprus and in November it participated in the sea-borne landings at Port Said during the Suez Crisis. Then in July 1958 it flew into Amman Jordan as part of the 16th Parachute Brigade intervention force.

Once again in June 1961 2 PARA formed part of a strategic reserve ‘fire-brigade’ deployment, this time to Kuwait to deter an Iraqi invasion threat. Alongside other British reinforcements the battalion occupied the Matla Ridge astride the main Iraqi tank route to Kuwait City. Subsequent deployments to the island of Bahrain followed in 1963 and 66. In 1964 D Company Group including Support Company were sent to Aden in anticipation of being deployed to Zanzibar due to the Communist uprising there but the operation was cancelled.

In early 1965 the battalion was flown to Singapore for jungle training and established jungle bases on the border against Indonesia during its confrontation with the newly established Federal Malaysia. C Company converted to a special patrols company operating in the jungle on SAS lines. An Indonesian Javanese battalion attacked the B Company base at Plaman Mapu on 27 April and was repelled, suffering 50 casualties at a cost of two paratroopers killed and seven wounded; the biggest battle of the confrontation.

From February 1966, 2 PARA completed a 12 month tour in Bahrain, with Special Patrol Company in Radfan. Based at Hamala Camp, it undertook training for IS (Internal Security) tasks in Aden and companies rotated into Aden to deal with the deteriorating IS situation. Duties included guarding prisons, check points and RAF Muharraq Airfield and carrying out mobile patrols.

In 1968 2 PARA deployed to Hong Kong after jungle training for a six month tour to counter illegal immigration from the People’s Republic of China. Another unexpected tour to the Island of Anguilla occurred in 1969 to quell political unrest over federation with other Caribbean states. A successful ‘hearts and minds’ operation resulted in the award of the Wilkinson Sword of Peace ‘for acts of humanity and kindness overseas’.

The first Northern Ireland tour started in February 1970 when the battalion was deployed to the Shankhill Road district of Belfast. 2 PARA was to spend 114 months in Northern Ireland across 16 tours conducted between 1970 to 2002, longer than any other parachute battalion. It also suffered the greatest single loss of life during a double PIRA ambush at Warrenpoint on 27 August 1979, when a company commander and 15 soldiers were killed in one incident.

New colours were presented to the battalion with the other regular battalions and 4 PARA in 1974. Between 1977-9, 2 PARA was posted to Berlin, followed by a two- year residential tour in Ballykinler in 1979-81.

The battalion embarked for the Falkland Islands conflict on 26 April 1982 aboard the North Sea car ferry MV Norland and was ashore on Sussex Mountain by 22 May, securing the southern part of the 3 Commando Brigade bridge-head. On 28 May 2 PARA attacked the Argentinean strategic reserve and airfield on the Darwin/Goose Green Peninsular. Over 1,250 prisoners were taken and 50 Argentineans killed during this bloody battle that cost the battalion 15 dead, including its Commanding Officer Lt Col ‘H’ Jones, who was awarded a posthumous VC. Bluff Cove and Fitzroy were captured by the battalion which fought its final battle at Wireless Ridge during the night of 13/14 June. 2 PARA was among the first troops to enter Port Stanley following the Argentinean surrender.

In 1983 the battalion served a six month tour in Belize, to deter a threatened Guatemalan invasion and came back in 1987-8. The barracks at Tern Hill, Shropshire, were bombed by the PIRA in 1989 and the battalion was committed to five Op BANNER and residential Northern Ireland tours in the 1990s.

2 PARA was the first battalion to move to Colchester to co-locate with the newly formed 16th Air Assault Brigade and completed two more Northern Ireland tours between 2000 and 2002. This was followed by two Operation TELIC tours - 3 and 7 - in Iraq in 2003 and 2005.

In the Spring of 2008 2 PARA formed the nucleus of a 16th Air Assault Brigade 1,150 strong all-arms Battle Group in Helmand Province Southern Afghanistan, during Op HERRICK VIII, returning in the Autumn.

In late September 2010, 500 men of 2 PARA returned to Afghanistan as part of the 16 Air Assault Brigade force for HERRICK 13.

George Medal for paratrooper who risked life in minefield to rescue wounded comrade.

I was a recalled reservist, back in Support Company 2 Para.

The True Facts of The Battle for Plaman Mapu, Borneo 27 April 1965 and the Men Who Fought It.

The True Facts of The Battle for Plaman Mapu, Borneo 27 April 1965 and the Men Who Fought It.

From the Tyne to the Jordan and back again - Vincent Leonard

Borneo: In the early morning of the 27 April 1965, Company Sergeant Major Williams was in his Company base defended only by the Company HQ, a Mortar Section and weak Platoon of young soldiers, when 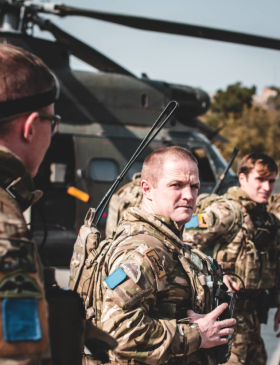 Operation Toral was the codename for the British presence within Afghanistan post-2014 as part of NATO's Resolute Support Mission.