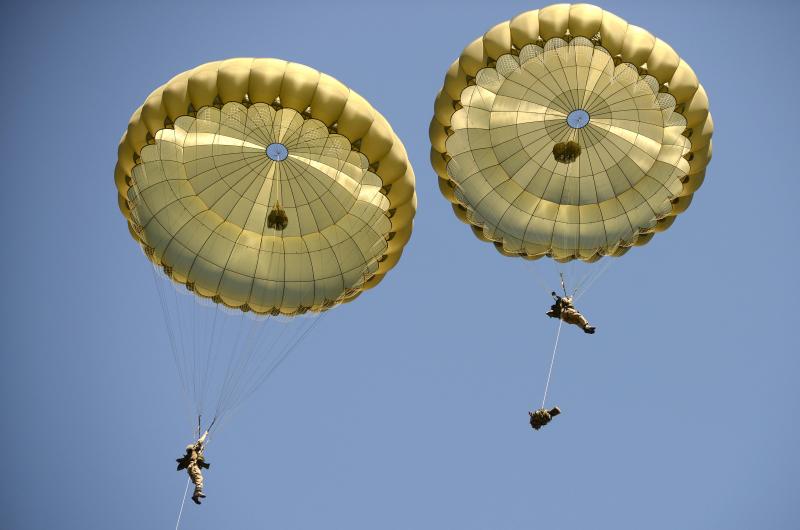 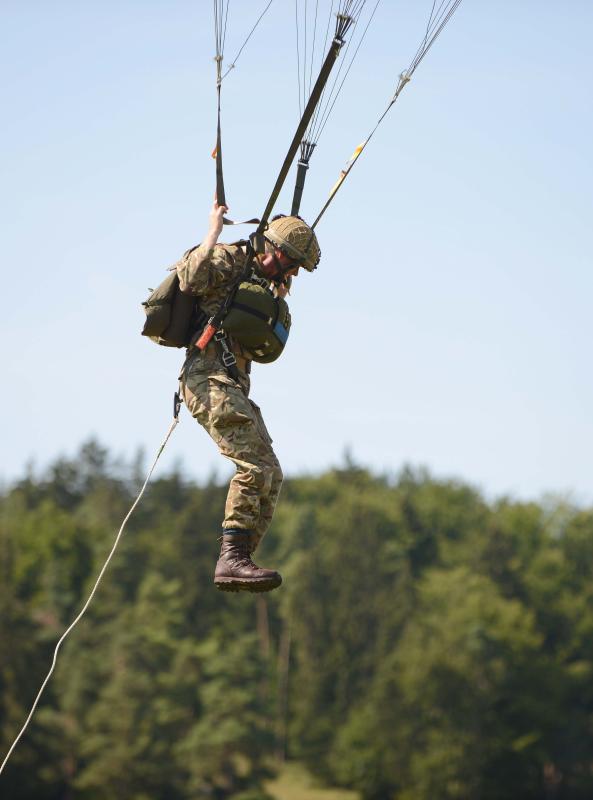 Colchester-based paratroopers are training alongside Italian soldiers on a US Army-led exercise in southern Germany.

C (Bruneval) Company, 2nd Battalion The Parachute Regiment (C Coy, 2 PARA) is on Exercise Swift Response, the largest multinational airborne exercise in Europe since the end of the Cold War. Some 4,800 soldiers from 11 NATO countries are training together to improve their ability to operate together in response to international crises.

C Coy is under the command of the Italian 183° Reggimento Paracadutisti Nembo, which also includes a company of American paratroopers for the exercise. The joint unit is part of a larger task force built around the US Army’s 1st Brigade Combat Team, 82nd Airborne Division, which is challenged to restore security to a country dealing with the aftermath of a failed coup and the threat of international terrorism.

The British and Italian troops parachuted in to the Hohenfels Training Area from two RAF C-130J Hercules as part of a mass drop of 1,300 paratroopers from 13 aircraft. From the DZ, the paratroopers marched overnight to capture an airstrip for additional troops and equipment to be landed. From there, the paratroopers carried out a non-combatant evacuation operation to take international observers to safety. As the security situation worsened, the task force launched offensive operations against the insurgents.

2 PARA’s Major Ben Morales said: “This exercise has been a great experience for our paratroopers. We haven’t trained with these Italian and Americans units before and only met each other 48 hours before the exercise started. We were able to make a plan that reflected each of our different ways of operating, and then got on with it.

“The relationship between us is working smoothly. We have liaison officers in the battlegroup HQ and I have an Italian and US officer working within my company, so we’ve got an immediate contact to help understand and communicate with the other units.”

Maj Morales, himself a US exchange officer working with 2 PARA, said: “I was on the aircraft as an American officer, with a British paratrooper sitting to my left and an Italian paratrooper to my right. We all jumped out together to do the mission together.”

Pte Josh Brown, 20 from Basingstoke, said: “It was a great jump, I was the first to leave my plane and the sky was already full of canopies. From there we’ve been working very closely with the Italians and before the exercise started we practised our urban skills with the Americans and played football with the Polish! We’re all paratroopers and understand each other, even if we’re speaking a different language.”

Private Alex Bailey, 20 from Blackpool, said: “This is my first overseas exercise and it’s been a really interesting experience to work with different armies and learn from the slightly different ways that we do the same job.”

Colchester-based 2 PARA’s core role is to alternate with 3rd Battalion The Parachute Regiment as the lead unit in the Air Assault Task Force (AATF), which is ready to deploy anywhere in the world to conduct the full range of military operations. 2 PARA took on the AATF role from the start of March, with the unit’s airborne infantry bolstered by artillery, engineers, signallers, medics and logisticians from 16 Air Assault Brigade.

For 16 Air Assault Brigade the exercise is a key step towards being ready to deploy within the US Army’s 82nd Airborne Division from 2016, as set out in a 2013 agreement between the two armies. It prioritised contingency operations and enabling a UK brigade to work inside a US division and a UK division inside a US corps, and a US brigade combat team to work inside a UK division and US division inside the UK-led Allied Rapid Reaction Corps.