Troop reinforcements were sent in late 1969 to check demonstrations, marches, riots and inter-communal house burnings. A ‘Peace Line’ was set up between the Falls Road and Shankhill Road to keep the Catholic and ascendant Protestant communities apart.

All three parachute battalions were regularly deployed for an average of nearly 14 tours each between 1964 -2005. Tours meant from four months to over two years on the streets of Belfast and Londonderry, or operating in the hills and countryside of South Armagh. Routine consisted of patrolling, vehicle check-points, ambushes and observation point surveillance and riot control; all under the constant threat of sniping and the bomb.

The accumulated total in months spent operating in the Province for 1, 2 and 3 PARA amounted to 24 years and six months. The cost was high: Sergeant Michael Willetts with 3 PARA was awarded a posthumous George Cross in 1971; in January 1972 1 PARA was involved in the riots on ‘Bloody Sunday’ in Londonderry and the following month the 16th Parachute Brigade Officer’s Mess was bombed at Aldershot; 17 soldiers from 2 PARA were killed in one bombing incident at Warrenpoint on August 27th 1979.

The Parachute Regiment received over 40 gallantry awards and 180 honours and commendations and 60 MIDs in this, the longest campaign, in the history of airborne forces. 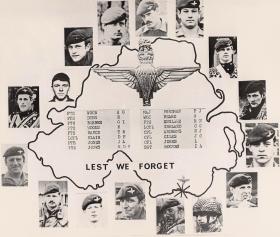