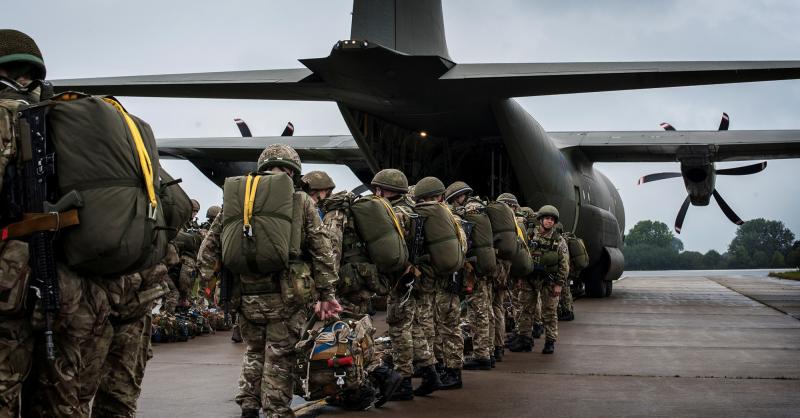 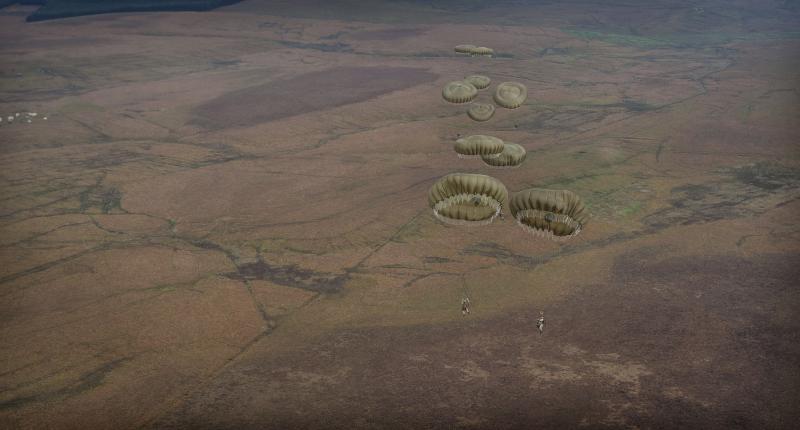 Paratroopers have practised a combat-style parachute jump as part of joint training between the British and French air forces.

Exercise Capable Eagle saw B Company, 2nd Battalion The Parachute Regiment carry out a jump from an RAF C-130J Hercules. The 50 paratroopers jumped in Overhead Assault Mode, wearing body armour and webbing with weapons and daysacks strapped to their legs.

Poor weather, including gusting winds at the Wiley Sike drop zone (DZ) in Cumbria was a problem and the Hercules, from Brize Norton-based 47 Squadron, had to climb from its low-level approach as cloud threatened visibility.

The plan was to find a gap in the weather nearer to the DZ. While the Paras hooked up their static lines and were checked by a team of Parachute Jump Instructors (PJI) the aircraft dropped to jumping height. Five passes later at 600ft and B Coy was on the ground, while the C-130J hugged the ground on its return to Leeming.

For the Colchester-based paratroopers, the jump was an opportunity to practise a key skill for their role in the Air Assault Task Force (AATF), which is held ready to deploy anywhere in the world at short notice to do anything from disaster relief to war fighting.

Major Adam Wilson, Officer Commanding B Coy, said: “An overhead assault jump is the perfect way to get a company of paratroopers on the ground within a matter of minutes. If the situation demands it, the speed of the descent and the equipment we are carrying mean that we would be ready to start fighting as we hit the ground.”

RAF air loadmaster Sergeant Gavin Livingstone said: “We like working with the Paras. They are very good at what they do on the ground, but are happy to place themselves in our care when it comes to parachuting.”

The jump was part of Exercise Capable Eagle, a joint exercise held by the RAF and the French Armée de l'Air at RAF Leeming in North Yorkshire. The training saw a 700-strong British-French Expeditionary Air Wing practising how they would work together to support a country facing political and military instability.