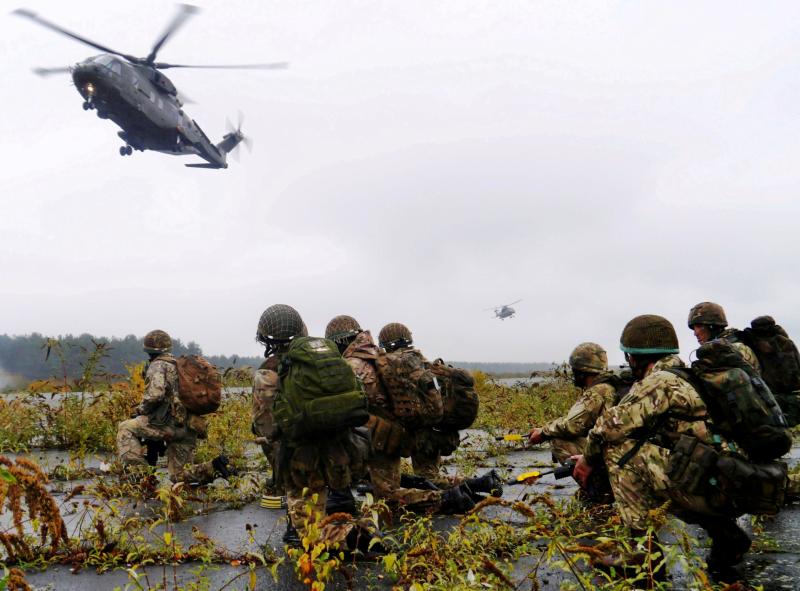 Exercise BLUE RAIDER saw B Company, 2nd Battalion The Parachute Regiment landed by RAF Merlin helicopters at Woodbridge in Suffolk. The troops fought through strong resistance to capture the former airfield’s control tower and runway, which date back to Woodbridge’s Cold War days as a United States Air Force fighter base.

For the Colchester-based paratroopers, the exercise practised a key skill for their role in the Air Assault Task Force (AATF), which is held ready to deploy anywhere in the world at short notice to do anything from disaster relief to war fighting.

Lieutenant John Bryning said: “Airfield seizure is one of the main methods of theatre entry, which is about getting into a country at a place of our choosing to secure a staging point for troops to follow with heavier equipment and develop operations further.

“Airfield seizure – whether by an air assault like this, rapid air landing or a parachute operation - is a core part of our role as paratroopers and an important skill to practise. We are on standby to deploy wherever the international situation demands and it is important that we are trained and ready to go.”

Private Jamie Found, 24 from Coventry, said: “We were all firmly briefed before we got on the helicopters about what the objective was, the enemy threat and how we were going to do it. On the ground we were hard, fast and aggressive - which is what the Parachute Regiment is all about - and we got the job done. The more we practice missions like this the better we will be if we have to do it for real.”

The troops were delivered to Woodbridge in two waves of two Merlin support helicopters, whose primary role is to move troops and equipment. The Merlins, based at RAF Benson in Oxfordshire, have recently returned from operations in Afghanistan and are on high readiness to deploy on contingency operations.

Lt Bryning said: “This exercise has been an excellent opportunity to work with Merlin helicopters. It’s important that we train together and understand how each other works, because we will deploy together on operations.”