Firing a HMG from the rear of a WMIK, 2 PARA, Ex Blue Panzer, Salisbury Plain, February 2014. 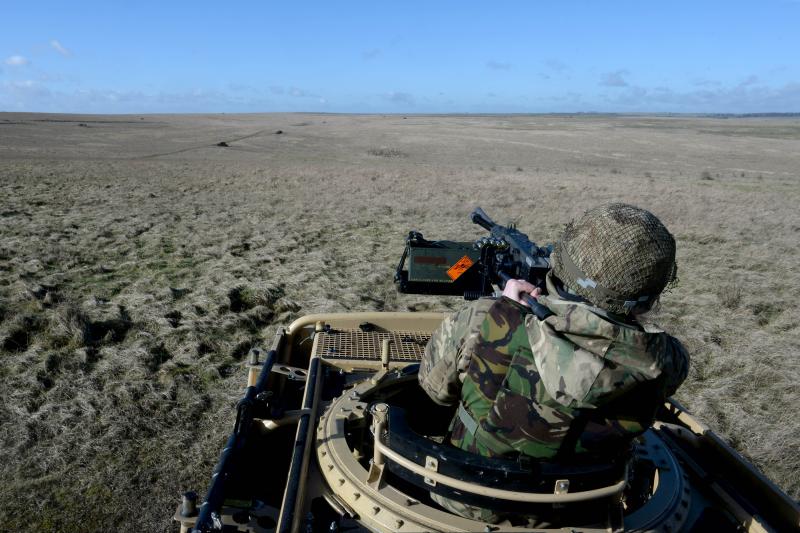 British Army Press Release dated 14 Feb 2014:   Paras hone their heavy weapons skills             Paratroopers have demonstrated the firepower they can bring to bear as part of the British Army’s rapid reaction force.   Exercise Blue Panzer saw 2nd Battalion The Parachute Regiment’s Anti-Tank Platoon fire Javelin and Next Generation Light Anti-tank Weapon (NLAW) missiles on a wind-swept Salisbury Plain.   The two high-tech weapon systems are intended primarily to destroy tanks and lightly armoured vehicles, but also provide an all-weather, day or night capability against fixed defences such as bunkers and buildings.   Javelin and NLAW are the most potent and precise weapons carried by the airborne infantry of 2 PARA in their role in the Air Assault Task Force, which is ready to deploy anywhere in the world to conduct the full range of military operations.   Private Daniel Jaques, 29 from Harrogate, said: “It’s been great to actually fire the Javelin for the first time. To get to this stage, you have to do a training course that includes all sorts of lessons including practice firing drills and setting up covert observation posts, as you would do in a war-fighting situation.”     Private Matt Johnson, 24 from Wigan, said: “In our role we train with a number of different weapon systems. It’s great to finally use some live missiles after all the training that we’ve done. I hit my target, which is a good job as all the lads were watching!”   The Colchester-based Paras also fired the formidable '50 Cal' Heavy Machine Gun and Grenade Machine Gun mounted on their RWMIKs, which are lightly-armoured Land Rovers specially adapted as highly mobile weapons platforms.

Platoon commander Captain Calvin Smith, 26, said “We are always getting new soldiers in the platoon so this has been a great opportunity to get the lads out on the ground and practicing their skills. We specialise in using of a number of different weapon systems and we have managed to practice using all of them on this exercise.”