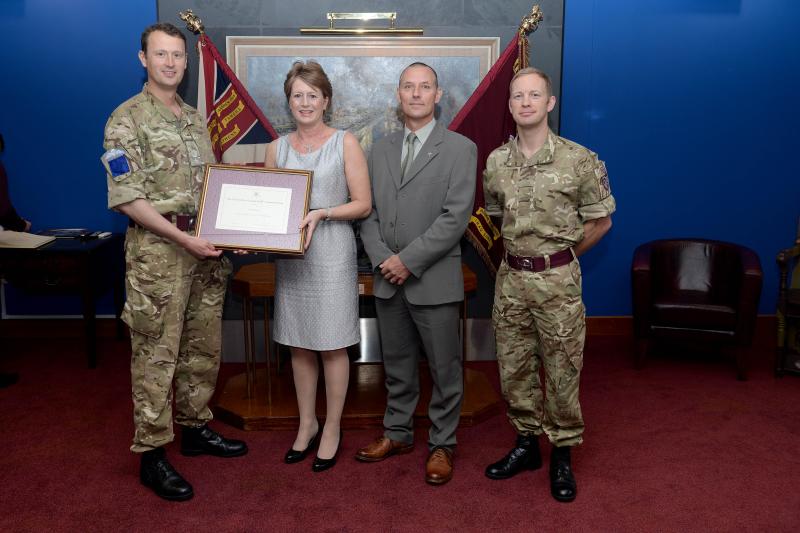 A civilian clerk described as “an unsung hero” has been recognised for her hard work supporting the families of Colchester-based paratroopers.

Karen Hayes has worked in the welfare office of 2nd Battalion The Parachute Regiment since 2001. She has helped to look after soldiers’ families while the battalion has served on demanding operational tours of Macedonia, Iraq and Afghanistan, as well as taken on the challenges of being ready to deploy at short notice as the British Army’s rapid reaction force.

Mrs Hayes’ work was recognised with the award of a Chief of the General Staff’s Commendation in the New Year's Honours List. She was presented with the award by Lieutenant Colonel Oliver Kingsbury OBE, Commanding Officer of 2 PARA, at Merville Barracks today.

Lt Col Kingsbury said: “Karen is richly deserving of recognition. Whatever the turbulence and change she has been the reliable constant, always available to take a problem and find the solution. Through all the stress and grief of supporting families of the killed or wounded, many of whom she has known personally, she has never betrayed a confidence and never turned down a request for help.

“Her devotion to duty and to the support of the families and soldiers of 2 PARA, over such a long and sustained period, has been truly remarkable.”

Mrs Hayes, who lives in Shrub End with her husband Lee, said: “I’m honoured and humbled to receive this award, which I consider I’ve been given for doing my job as part of a bigger team.

“It’s an old cliché that a happy family makes for a happy soldier and working in the welfare office is a busy and varied job to achieve that. We have to do everything from giving advice on schools and housing to being a tourist guide, while also being a friendly and impartial ear to just listen. The problems we help with range from trivia to the tragic, but the key thing to remember is that nothing is trivial to the person asking for help at that moment.”