Sidney Cornell came from Portsmouth, Hampshire, and had an African American father. He volunteered for airborne forces while serving with The Royal Army Service Corps.

The course was attended by 15 officers and 212 other ranks, who completed 1642 jumps between them. Winds were gusty through the whole course and really good parachuting weather was extremely rare. The outstanding feature of this course was the high injury rate which was mainly due to the rough weather conditions. Of the 16 injuries there was one fatal accident, and 8 'C' Class Injuries (e.g. concussion and bone fractures).

Sidney received a good course report which notes "Best performer in section, intelligent, willing, cool and keen." On qualifying as a military parachutist he was posted to B Company,7th (Light Infantry) Parachute Battalion.

During the Normandy campaign he served with great bravery as a company runner, notably supporting Major Neale during the clearance of Le Mariquet woods, and later his successor Major Bob Keene when B Coy attacked German forces occupying a farm in Le Bois de Bavent.

He was awarded the Distinguished Conduct Medal in February 1945 for his actions in Normandy. His citation reads:

"This soldier was one of the parachutists who landed behind the German lines in Normandy on the night of the 5th/6th June 1944. During the next five weeks he was in almost continuous action of a most trying and difficult nature. Cornell was a company runner and has repeatedly carried messages through the most heavy and accurate enemy mortar and Machine Gun fire. Four times wounded in action this soldier has never been evacuated and carries on with his job cheerfully and efficiently. Very many acts of gallantry have been performed by members of the battalion but for sustained courage nothing surpasses Cornell's effort. His courage and many wounds have made him a well known and admired character throughout not only his own battalion but also the whole brigade. Space does not permit a record of all his feats as he distinguished himself in practically every action and fighting took place daily.

On the 18th June 1944 his company carried out a raid on a strong enemy position in the Bois de Bavent area. The position was stronger than expected and the company was hard pressed and the wireless set destroyed. Cornell was sent back with a verbal message, he was wounded during the journey but carried on and delivered his message correctly and set off with the reply. He was wounded a second time on this return journey but again carried on and again delivered the message correctly. During the remainder of this raid, despite his two wounds, he was outstanding for his courage and dash. The courage and devotion to duty displayed by Cornell on this one occasion was an inspiration to all who witnessed it. He has performed similar runs on countless occasions and, as has been pointed out before, has been wounded twice more but is still the runner of his company and is as cheerful as before.

On the 10th July 1944 his company again carried out a raid on the same area and again and as usual, Cornell's complete disregard for his own safety became the chief topic of discussion amongst his fellow soldiers. He has never failed to deliver a message correctly despite the fact that he has usually carried it through a perfect hail of enemy mortar bombs and shells and very frequently aimed Machine Gun fire as well.

He is a truly magnificent parachutist and I cannot recommend him too strongly for a decoration."

Thereafter he swiftly gained promotion to Sergeant while taking part in Allied actions across North West Europe in 1944-5.

He saw action in the Ardennes during the winter fighting of 1944-5 and on 24 March 1945 jumped under fire during the Rhine Crossing,Operation VARSITY, as No 3 Section Commander in 5 Platoon, B Coy.

B Coy HQ, No 5 Platoon and No 4 Platoon bore the brunt of the casualties at the bridge, including Sgt Cornell, who was killed as a result of the bridge detonation.

Sgt Sidney Cornell died on the night of 7/8 April 1945, aged 29 years, and was given a field burial next to the bridge along with the other members of B Coy who were killed. He is now buried at Becklingen War Cemetery overlooking Luneberg Heath, Germany.

Sergeant Sidney Cornell was awarded the Distinguished Conduct Medal (DCM) for bravery during the Battle of Normandy. Recommendation as follows: 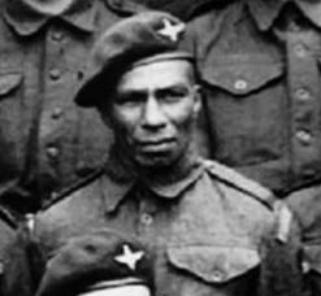