Private William James Hogg was the son of David and Fanny Hogg, of Edinburgh.

He volunteered for airborne forces while serving with The Royal Signals during World War II and qualified as a military parachutist on course 150 which ran at RAF Ringway from 24 January to 8 February 1945. Tragically, five members of this course, who were posted to 7th (Light Infantry) Parachute Battalion as reinforcements, including Pte Hogg, were all later killed in action on the same day.

In the course of the ensuing battle, in which the 13th Battalion was also engaged, the 7th Battalion lost 6 killed, and 21 wounded, most from the initial ambush of the four leading trucks of B Coy.The airfield was captured with 19 ME 109s, 4 FW 109s, 2 JU 88s, 2 JU 52s and much other valuable equipment.

B Coy HQ, No 5 Platoon and No 4 Platoon bore the brunt of the casualties at the bridge.

The battalion war diary records the day's casualties as 27 killed, 33 wounded and 6 missing presumed killed, mostly from B Coy. Some of those injured later died of their wounds including Pte Hogg.

Pte Hogg died on 9 April 1945, aged just 18 years, and was given a field burial next to the bridge along with the other members of B Coy who were killed. He is now buried at Becklingen War Cemetery overlooking Luneberg Heath, Germany. 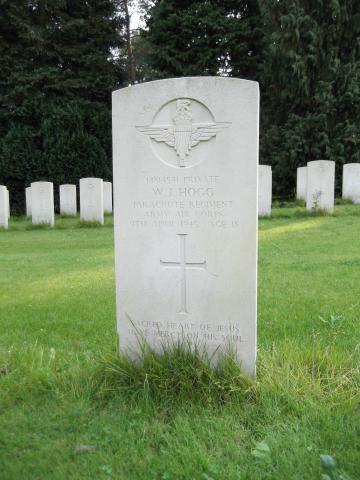