Tony Hibbert was educated at Marlborough but had to leave when he was 16 because of the Great Depression.  Sent to Germany by his employer it took only a short while for Tony to appreciate that the country was one huge armed camp preparing for war. In 1935 he packed his bags and skedaddled for home, threw up his job and started to cram for the Royal Military Academy (RMA).

Tony passed out of the RMA and was commissioned into the Royal Artillery In January 1938.  Later he commanded a half-Battery of 15 AA Battery RA in the British Expeditionary Force, equipped with obsolete guns salvaged from a Russian Cruiser in 1917.  He defended the Northern perimeter of Dunkirk for the last four days of the siege and when his ammunition ran out on 31 May he had to destroy his guns. He was later mentioned in despatches for his actions. Tony and his men were evacuated on an old Thames Tug, “Sun X” and eventually reached Ramsgate where they were greeted by hordes of women volunteers who provided them with sustenance and good cheer.

The Paras and Arnhem

It took 10 days to collect the survivors of the Regiment in Aberystwyth, albeit armed with rifles and revolvers only.  All three subalterns in Tony’s Battery volunteered to join anything that would get them back in the firing line quickly. Tony joined No. 2 (Parachute) Commando, the 'egg' out of which the Parachute Regiment was born. While serving with No 2 Commando, Tony dumbfounded all of his fellow officers by conducting a night jump from the balloon in full mess kit and spurs! A fact attested by both Cicely Paget-Bowman and Arthur Kellas (See also Tony’s No 2 Commando article).

Tony served with the Paras in North Africa and Italy as a Staff Officer and after completing a course at the Staff College, Camberley, was posted to the 1st British Airborne Division as Brigade Major of No 1 Parachute Brigade in July 1944.  Soon after he was involved in planning for the Arnhem Operation and went to Airborne Corps HQ with his Brigade Staff to receive orders from General Browning.   After an uneventful drop onto DZ-X, Tony led the Brigade HQ Group in a race to the bridge and joined forces with Lt. Col. Frost and the 2nd Battalion. They were under orders to hold the bridge for 48 hours and in the event they held it for 72 hours against overwhelming odds. Tony and the remnants of the bridge party tried to get back to the Oosterbeek perimeter by infiltrating German lines but all except 2 were taken prisoner. Subsequently, while being transported in a lorry to Germany, Tony escaped by jumping off the back with Major Denis Munford.  The SS guard on the truck opened fire on them both and Denis Munford was wounded and later recaptured. Although bruised and bloodied from the jump, Tony escaped injury from the bullets and made good his escape. The SS guard lost his head and then fired into the back of the truck at Tony’s unarmed comrades in retaliation; resulting in the eventual deaths of six soldiers. Commenting later on the tragedy, he observed “this is a burden I shall carry to my grave”.

After linking up with the Dutch Resistance Army he and other senior British officers were able to round up remnants of the 1st British Airborne Division evading capture, and organise the famous Pegasus I escape. This daring and brilliantly executed operation resulted in the successful evacuation through German lines of 138 men back across the Rhine to Allied positions. Having crossed the river with the others Tony was sitting on the bonnet of his overcrowded jeep when it collided in the dark with another coming in the opposite direction. He broke his leg very badly, resulting in a 5 month hospital stay.

In 1945 Tony received a Military Cross for his gallant actions at the bridge and during the subsequent escape. In 2009 he donated this MC to the Hartenstein Museum at Oosterbeek in recognition of the acts of heroism performed by the Dutch in sheltering and aiding the beleaguered remnants of the British Airborne Division. (See photos and Tony’s Arnhem article.)

After discharge from hospital he commanded  “T” Force-Kiel, which  was tasked to prevent the Russians taking Kiel and Denmark contrary to the Yalta Agreement.  (See www.majorhibbertslog.co.uk  Operation Eclipse and also T Force Videos.)  With a force of 650 men he succeeded in this task but only by disobeying his Corps Commander’s orders for which he was placed under arrest on VE day.

Thus, in Tony  words, “my military career ended in pleasing symmetry as I had also been placed under arrest by my Battery Commander on the day war was declared. I am pleased to say that after both arrests I was absolved from blame and each time was awarded a Mention in Despatches by my arrestor!”

In 1947 Tony was discharged from the Army on Medical Grounds with a Tax Free Disability Pension and went into business.

After a short and successful career in business, Tony retired in 1967 and created a new Dinghy International Development Class and founded the Salterns Sailing Club for children in Lymington which still flourishes today.

In 1981 Tony and his wife Eira bought Trebah a house nestling on the edge of the Helford estuary in Cornwall.  Although Tony and Eira knew nothing about gardening they were persuaded to give up their retirement to restore the 26 acre grounds; it took them five years to clear away the fallen trees, rubbish and accumulated neglect. The family then set up the Trebah Garden Trust, a registered charity, and donated the garden, house and Trebah Lodge to the Trust. Trebah is now one of the major visitor attractions in Cornwall, attracting over 100,000 visitors every year, which through the foresight and hard work of the Hibbert family has been secured for future generations to enjoy.

Tony Hibbert was awarded the MBE for his contributions to Tourism and Sailing in 2006.

A recognised authority on Arnhem he formed part of a team of veterans who gave talks to the students of the Army Staff College on their battlefield tours at Arnhem up until 1996. Along with Major John Waddy, he continued this role when the tours were restarted by the Army Division of the Defence Academy in 2008.

He was a lifelong supporter of the airborne forces community and served as the President of the Royal Cornwall Branch of the PRA. In 2011 he presented the Colonel Commandant of The Parachute Regiment with a ceremonial sword, known as the Hibbert Sword, which he wished to be awarded annually to the most promising young officer. He was also a co-founding member of the Arnhem 1944 Fellowship.

Tony Hibbert died at home at the age of 97 on Sunday 12 October 2014 surrounded by his family. He was unfailingly generous of spirit, with great dignity and determination, and will be sadly missed by his family and numerous friends.

In July 1944 I passed out of Staff College, and was posted to 1st Parachute Brigade as brigade major to General Lathbury.

We waded out into the phosphorescent waters of Dunkirk where I and most of my half battery were picked up by a flotilla of launches which ferried us out to a Thames tug.

Tony Hibbert’s father, James Edmund Hibbert was a rubber planter in Malaya when WW1 started.  He sailed for England and was commissioned into the South Lancashire Regiment. 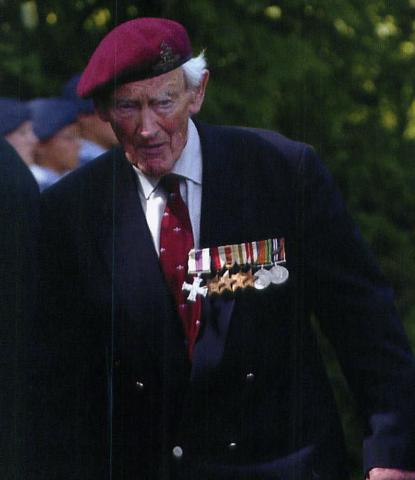