Robert 'Bob' Hilton was born in November 1961 at Wattisham, Suffolk. His father, David, was serving as a Corporal in the RAF Police at nearby RAF Wattisham at the time. His mother, Pamela, was from Stowmarket, Suffolk.

Bob left school at 15  to begin a trade apprenticeship in Carpentry and Joinery. He joined the Territorial Army on his 18th birthday, 6 November 1979.

As a reward, he was granted leave until 10 April. Upon reporting to 2 PARA, Bob recalls being informed by the Adjutant, Captain David Wood, of three things:

'One, we were not going on a nice sunny tour of Belize. Two, we were going to war and three, we would still have to pass a selection test to see if we were good enough for ‘his’ battalion!

Bob subsequently passed however, and was sent to 3 Platoon, A-Company. His first Platoon Commander was Lieutenant Guy Wallis, Platoon Sergeant was Jim Beattie and the Section Commander was Corporal ‘Boogie’ Agnew.

Soon afterwards, 2 PARA Battle Group embarked for the Falklands. Bob travelled onboard the Motor Vessel(MV) Norland (a hastily converted North Sea Ferry) from Postsmouth on 29 April 1982, bound for the South Atlantic and the recapture of the Falkland Islands. During the conflict, Bob took part in the Battle of Darwin Hill and Goose Green and assault on Wireless Ridge.

Returning to the UK, Bob continued to serve in The Parachute Regiment for over twenty years. During his career he served across A, C, D, Support and HQ Coys of 2 PARA, completing four operational tours with the Intelligence Cell of C Coy, 2 PARA. In total, Bob served on seven operational deployments to Northern Ireland, Op Palliser to Sierra Leone in May 2000, Op Bessemer to Macedonia in Autumn 2001, and Op Fingal to Afghanistan in early 2002. He also completed two garrison tours to Belize in the 1980s.

Bob retired from from Regular Army Service in July 2003. In the latter part of his service career, he became increasingly interested in Parachute Regimental history and volunteered at the Airborne Forces Museum, Aldershot after leaving the Army.

His interest in Regimental and Airborne history continued to broaden, and helped establish him as a subject specialist. He worked as a Battlefield Tour Guide to veterans, enthusiast groups and school parties visiting First and Second World War battlefield sites across North West Europe. After volunteering for the new Airborne Assault Museum at IWM Duxford, Bob was appointed as Assistant Curator in January 2014.

His profile picture shows Bob in Kabul, March 2002. During his service with Intelligence Section, Sergeant for 2 PARA.

A profile of David Hardman

David Hardman was born on 22 December 1959 at Hamilton, Scotland, the youngest of a family of four, and spent his early years on the Beechfield small holding in Meikle Earnock Road. 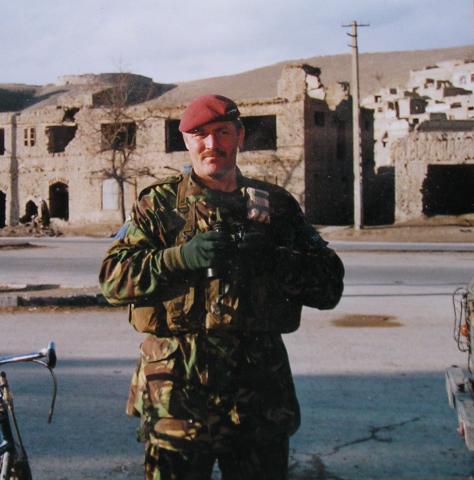