He was commissioned into the Parachute Regiment in 1981, serving with the 2nd Battalion as a platoon commander, company second in command, and company commander. He completed operational tours in the Falklands, Belize and South Armagh. In 1989 he was seconded to The Royal Scots Dragoon Guards to command a Challenger equipped armoured squadron in Germany.  He deployed with it to the Gulf on Op GRANBY in 1990.

Lieutenant General Page was Chief of Staff of 24 Airmobile Brigade at Catterick and moved with the Brigade to Colchester in March 1993 when it formed part of NATO’s Multinational Division (Central) along with Dutch, German and Belgian brigades.  He then served on the personal staff of the United Nations Protection Forces in Sarajevo and subsequently served in NATO peacekeeping forces in Boznia & Herzegovinia (IFOR,SFOR), Albania (AFOR) and Kosovo (KFOR).  As Colonel Employment Policy (2000) he was responsible for the Army’s Equality and Diversity Agenda, and then worked in the MOD, Whitehall on the strategic planning staff.

He assumed command of 16 Air Assault Brigade in December 2002, and commanded the brigade on war-fighting and stabilisation operations during Operation TELIC 1 in Iraq (2003).

Lieutenant General Page took over command of the UK’s standing Joint Force Headquarters, the high readiness deployable staff headquarters based at Permanent Joint HQ Northwood, in February 2005. In his capacity as the Chief of Joint Force Operations (CJFO) he conducted numerous small scale operations and exercised at national medium scale.  The operations included most of his staff deploying to conduct the UK preliminary operation for Op HERRICK and the Op HIGHBROW evacuation from Lebanon in July 2006.  He was personally involved in several security consultancy tasks in his capacity as CJFO. Promoted to Major General in December 2006 he was Commander, International Security Assistance Force’s Regional Command (South) in Kandahar, Afghanistan from April 2007 until February 2008 when he returned to the UK and took up Command of Headquarters 6th (United Kingdom) Division in York.

In February 2012 he was promoted Lieutenant General and assumed the appointment of Commander Force Development & Training within Army Headquarters, becoming a member of the Executive Committee of the Army Board.

Lieutenant General Page is married to Dee and they have two children.

Compiled by Harvey Grenville with the kind assistance of Capt Ed Montgomery, ADC to Gen Page 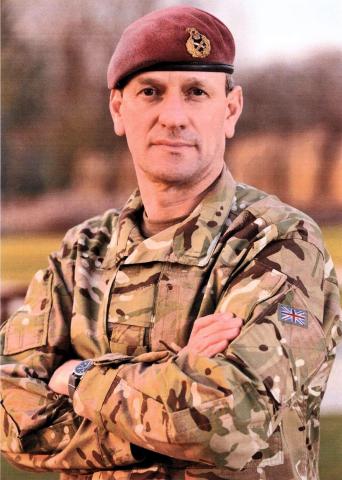