Private John Gwynfor Jones was the son of John and Sarah Jones, of Gwynfe, Carmarthenshire.

He was part of a contingent of 100 men from the King’s Shropshire Light Infantry, who were drafted as reinforcements to 7th (Light Infantry) Parachute Battalion on 3 July 1944 in the Normandy campaign. The commanding officer, Lt Col Pine-Coffin, later commented: "They were all first class material and very quickly fitted into the battalion, absorbing the spirit which they found there. It is interesting to note that when the time for a decision came, they were so much part and parcel of the battalion that over 80% of the survivors volunteered for parachuting and so accompanied the battalion to the end of its operations."

Pte Jones  returned to the UK with the battalion in September and qualified as a military parachutist on course 135 which ran at RAF Ringway from 24 September to 7 October 1944.

He went on to fight in the Ardennes and then took part in the final mass allied parachute and glider assault of World War II, Operation Varsity, on 24 March 1945, as a member of 5 Platoon, B Coy.

The museum’s records are incomplete regarding which incident resulted in the death of Pte Jones, however there are indications that he was killed in action, or died from wounds sustained, at Wunstorf airport. 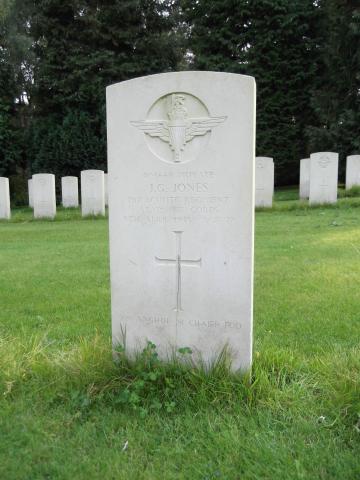