Jim Lund was born in 1916 and worked as a labourer in Keighley, Yorkshire before enlisting in the Army in February 1935. It appears that he had returned to civilian life by the time war had been declared however he immediately rejoined the colours in September 1939.

He served with the British Expeditionary Force in France from 24 September until his evacuation from Dunkirk around 31 May 1940. He remained in the UK serving with the Royal Artillery until he volunteered for parachute duties in 1943 and qualified as a military parachutist at Ringway on Course 71 which ran from 5 to 17 July. The course instructors noted in their report that Jim was a “Good Section Leader – made excellent progress”.

In August 1943 Jim joined the 2nd Battalion, Parachute Regiment in North Africa as a replacement for losses sustained during the Sicily invasion. He embarked on the Royal Ulsterman with the rest of the Battalion for the invasion of Italy in September. After occupying defensive positions near Taranto the battalion progressed North reaching Altamura towards the end of September. By the end of October the battalion had moved to Barletta and remained there until orders were received to return to the UK. After embarkation at Taranto, Jim arrived back in Liverpool aboard the Samaria on 9 December 1943 in time for Christmas.

On return to the UK he was billeted in the Grantham area with the rest of the battalion in the lead up to D-Day. Soldiers of the 1st Airborne Division suffered a period of frustration and disappointment as they were not used in the Normandy landings and a succession of planned airborne operations to support the Normandy foothold were cancelled because the situation was so fluid. The 2nd Battalion was eventually deployed in Operation Market to secure the bridge at Arnhem and Jim jumped onto DZ-X, west of Wolfheze, on Sunday 17 September 1944 as part of No 3 Section, Assault Platoon HQ Company. The battalion’s commanding officer, Lt Col John Frost, fully exploited the element of surprise and secured the northern end of the bridge within hours of landing after a quick battle march from the DZ. HQ Coy, under the command of Major Francis Tate, occupied houses adjacent to the ascending ramp of the bridge.

On Monday, the 9th SS Panzer Division’s Reconnaissance Battalion attempted to pass through the battalion positions and the men fired from the houses immediately disabling the lead vehicles as they came off the bridge onto the ramp. In an action lasting two hours around a dozen enemy vehicles, mostly half tracks were disabled and around 70 Germans were killed. This was probably the high point of the British defence, thereafter the Germans employed a more systematic approach, using artillery and tank shells to progressively destroy the houses occupied by the British. With the houses demolished or on fire the men were forced to fight from slit trenches. The means to resist, if not the spirit, was continually weakened since there were no reinforcements or resupply to sustain the British positions, and armed resistance ended at the Bridge in the early hours of Thursday morning. The men were instructed to split into small groups and break out to Divisional positions; Jim was one of those captured trying to slip through the enemy lines.

He was transported by railway in a cattle truck, along with other airborne soldiers taken prisoner at Arnhem, to Stalag 12A at Limburg arriving there approximately one week after his capture. Situated in Hesse, Limburg was a large camp in Germany which processed newly captured POWs. (The camp held around 15,000 prisoners when it was liberated in 1945.) At the end of October Jim was transferred to Stalag 4B Muhlberg in Eastern Germany situated between Leipzig and Berlin. This was another large camp holding up to 16,000 men and by the end of war conditions were reported to be harsh with a lack of bunks, bedding, clothing and food. He remained at Muhlberg during the Winter of 1944/45 until the camp was liberated in April 1945.

On repatriation to the UK Jim rejoined the 2nd Battalion and deployed to Palestine. In the under strength battalion he was quickly promoted to Sergeant and continued to serve with the battalion until his discharge on 1 February 1947. His discharge certificate records him as “Sober, honest and hardworking. Has carried out his duties efficiently.”

After his discharge Jim went to live in Australia but returned to Yorkshire in 1951. He died in Keighley in 1974.

Profile compiled by Harvey Grenville, with information from Phil Jennett. 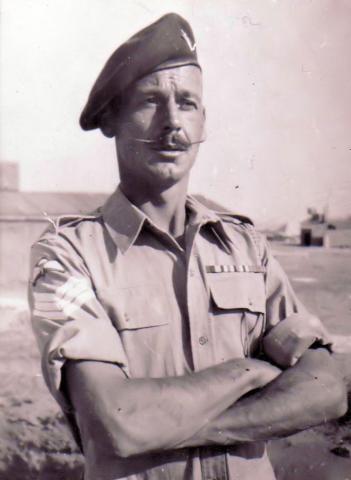