Private Horace William Corbett was the son of James and Alice Corbett, and husband of Gladys Corbett, of Bookham, Surrey.

He was part of a contingent of 100 men from the King’s Shropshire Light Infantry, who were drafted as reinforcements to 7th (Light Infantry) Parachute Battalion on 3 July 1944 in the Normandy campaign. The commanding officer, Lt Col Pine-Coffin, later commented: "They were all first class material and very quickly fitted into the battalion, absorbing the spirit which they found there. It is interesting to note that when the time for a decision came, they were so much part and parcel of the battalion that over 80% of the survivors volunteered for parachuting and so accompanied the battalion to the end of its operations."

Pte Corbett  returned to the UK with the battalion in September and qualified as a military parachutist on course 136 which ran at RAF Ringway in the following month.

He went on to fight in the Ardennes and then took part in the final mass allied parachute and glider assault of World War II, Operation Varsity, on 24 March 1945, as a member of 5 Platoon, B Coy.

B Coy HQ, No 5 Platoon and No 4 Platoon bore the brunt of the casualties at the bridge, including Pte Corbett who was killed as a result of the bridge detonation.

Pte Corbett died on the night of 7/8 April 1945, aged 29 years, and was given a field burial next to the bridge along with the other members of B Coy who were killed. He is now buried at Becklingen War Cemetery overlooking Luneberg Heath, Germany. 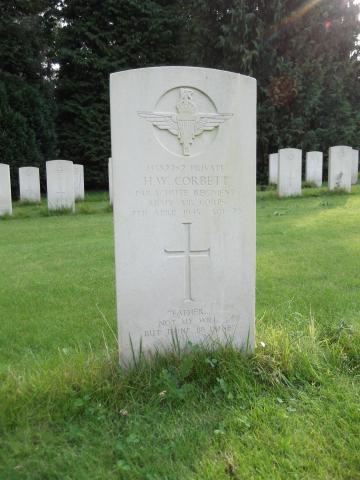