Private Harry Smollan was the son of Henry and Annie Smollan, who later settled in Montreal, Province of Quebec, Canada. His brothers Joshua and Dennis also died in service.

He enlisted into the West Yorkshire Regiment (Prince of Wales's Own) and was later attached to the 7th (Light Infantry) Parachute Battalion in World War II, serving with the battalion during Operation Varsity and the subsequent advance east to the Baltic.

By 7 April 1945 the battalion reached Petershagen, in between Osnabrück and Hanover. They continued to proceed east by motor transport and encountered enemy forces defending Wunstorf airfield at around 14:30 hours, although earlier reconnaissance reports had indicated that it had been abandoned, resulting in the ambush of the leading elements of B Coy.

The battalion proceeded on to its main task, to capture Neustadt and the river crossing. In advance of this, A Coy was ordered to secure the village of Moordorf, which lies in between Wunstorf and Neustadt.

A Coy observed movement as they approached Moordorf and therefore proceeded to advance up the ditches at the side of the road. When the leading platoon led by Lt Hunter MC and Coy HQ were a short way from Moordorf there was a loud explosion between them and the rest of the column, resulting in an enormous crater in the road.  As the troops were in the ditches at the time only one fatal casualty resulted – Harry Smollan. Two other men were stunned and treated for shock but rejoined the next day.

It was later found that this crater was blown by three 200 kilogram aerial bombs laid in a concrete pipe inserted under the road, and fired electrically from a slit trench about 100 yards away.

It was also found that there were two other similar arrangements with the same aerial bombs and concrete pipes at intervals of fifty yards along the road; the one that was blown was the most distant one.  By some miracle the other two were not blown, otherwise the casualties to the battalion would almost certainly have included the bulk of A Coy, the 7th  Battalion’s Advance HQ and the commander of the 5th Parachute Brigade (Brigadier Poett) who was travelling with them at the time.

Pte Harry Smollan died on 7 April, aged 19 years, and was given a field burial in a nearby house garden. He is now buried at Becklingen War Cemetery overlooking Luneberg Heath, Germany. 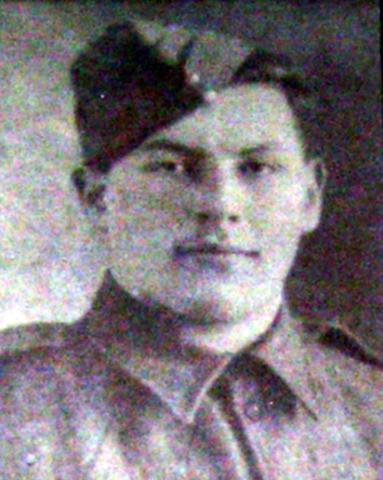 Bill Anderson said:
Harry was one of six siblings to serve during WW2, but they came from Middlesborough and moved to Newcastle upon Tyne. The family of three surviving siblings and the mother moved to Canada after the war.
Add your comment