Glynne George Medlicott was born at Church Stretton, Shropshire in 1922. He worked as a butcher before enlisting at Shrewsbury into The Royal Berkshire Regiment in September 1941. He volunteered for airborne forces in 1943.

Glynne ‘Jungle’ Medlicott qualified as a military parachutist on course 61, which ran at RAF Ringway from 19 April to 3 May 1943. The course instructors’ notes record: ‘Good NCO. Works hard. Not nervous. Good Jumper'

He was selected to serve with 3 Platoon, 21st Independent Parachute Company, the pathfinder force for the 1st Airborne Division and initially served as a Lance Corporal. Glynne Medlicott went to North Africa and Italy with 21st Ind Para Coy. Around this time he was promoted to Corporal. While in Italy he was posted to the 1st Independent Parachute Platoon which was part of the 2nd (Independent) Parachute Brigade, when it was formed in Italy.

Cpl Medlicott jumped into the South of France on Operation Dragoon from pathfinder aircraft no 2 and successfully landed on Drop Zone O. He was later promoted to War Substantive Sergeant and served in Greece and Palestine with 6th Airborne Division.

The combat jump in Greece at Megara was hazardous because of a strong wind. Glynne Medlicott recalled: 'I felt a certain amount of trepidation as I followed my platoon officer out of the aeroplane. I immediately started twisting and turning in the air and I tried to untangle the rigging lines but in vain. I hit the ground and fell but the wind was so strong that I was whirled away at about 15 miles an hour towards the sea and the defensive wire that was around the field. Bouncing and twisting, I was pulled across the field and could not get my harness free. An empty container with its parachute still attached, crossed over the top of my rigging lines between myself and my 'chute, and made me helpless. I was blown in the wire. Kicking, struggling, trying tear myself loose, but I was held there. Fortunately one of my comrades came across and cut me free.'*

After he was demobbed he returned to his previous career as a butcher until retirement in 1988.

In 2010 Glynne Medlicott was awarded the Légion d’Honneur, for his part in Operation Dragoon by French President Nicolas Sarkozy, at the Royal Hospital, Chelsea.

By Wendy George with assistance from Bob Hilton 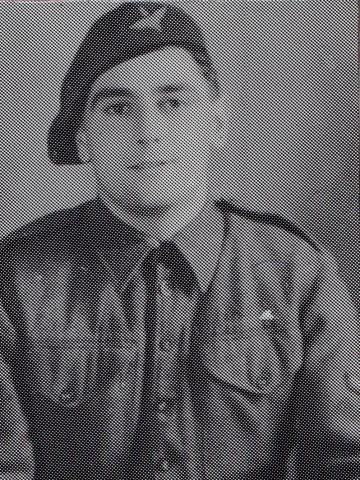