Private George Spencer Dodd was the son of James and Lily Dodd, of Wallsend, Northumberland.

He volunteered for airborne forces, along with his friend Arthur Gray, while serving with the Durham Light Infantry during World War II and qualified as a military parachutist on course 85 which ran at RAF Ringway in October 1943. The course instructors' notes recorded that he was an "outstanding performer, fine stick jumper." Gray also qualified on the same course.

After qualifying, both men were posted to B Company, 7th (Light Infantry) Battalion, and fought in the campaigns to liberate North West Europe from German occupation including the final mass allied parachute and glider assault of World War II, Operation Varsity, on 24 March 1945. By this time Pte Dodd was serving in No 3 Section of 4 Platoon.

B Coy HQ, No 5 Platoon and No 4 Platoon bore the brunt of the casualties at the bridge, including Pte Dodd who was killed as a result of the bridge detonation. His friend Arthur Gray, who had also joined airborne forces from the DLI and qualified on the same parachute course with Dodd, was killed in the explosion as well.

Pte Dodd died on the night of 7/8 April 1945, and was given a field burial next to the bridge along with the other members of B Coy who were killed. He is now buried at Becklingen War Cemetery overlooking Luneberg Heath, Germany. 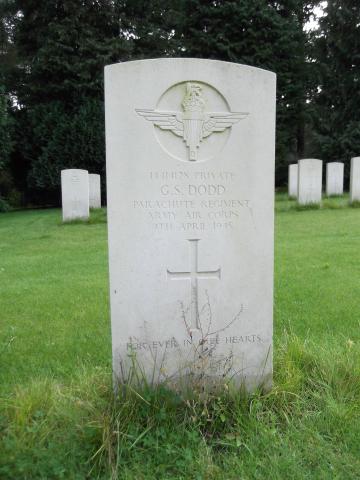