General Sir Geoffrey Howlett was born in India on 5th February 1930.  He was educated at Wellington College and attended the Royal Military Academy Sandhurst (Intake 5, Rhine Company) before being commissioned into his father’s Regiment, The Queen’s Own Royal West Kent Regiment, in July 1950.  From 1951 to 1952 he served as a Platoon Commander with his battalion in Malaya and won the Military Cross there in March 1952.

After being ADC to the British Commandant in Berlin, he transferred in 1955 to the Parachute Regiment,  joined the 3rd Battalion and took part in the parachute assault on Port Said in November 1956,  and also the anti-terrorist campaign in Cyprus.  He was then an instructor at Eaton Hall and at Mons Officer Cadet Schools before becoming Adjutant of the 2nd Battalion . After attending the Royal Air Force Staff College he serve d on the staff of Headquarters 16 Parachute Brigade, and in 1964 did a United Nations tour in Cyprus. His next appointments were as Training Major with 15th(Scottish) Battalion (Territorial Army) and after this was appointed Second-in-Command of the 2nd Battalion.

After attending the Joint Services Staff College in 1969, he was appointed Military Assistant to the Commander-in-Chief Allied Forces Northern Europe in Oslo in.  He commanded the 2nd Battalion The Parachute Regiment from 1971 to 1973, during which time the battalion completed four operational tours in Northern Ireland and he was awarded the Order of the British Empire for gallantry.

After being an instructor from 1973 to 1975 at the Royal College of Defence Studies, he took command of 16 Parachute Brigade.  Following this, he became Director of Army Recruiting in 1977, also as a Brigadier, and in 1979 he assumed command of the 1st Armoured Division in Germany during which time he was awarded the Order of Merit First Class from Lower Saxony.  In 1981 he was appointed Colonel Commandant of the Army Catering Corps, and the Army School of Catering Officers Mess hosted several Regimental Officers’ annual dinners.

Major General Howlett became Commandant at Sandhurst in March  1982 but for only a year, taking up the appointment of General Officer Commanding South East District in the rank of Lieutenant General in 1983, and was gazetted a Knight Commander of the British Empire in the New Year’s Honours list in 1984.

His final military appointment was as Commander in Chief Allied Forces Northern Europe in Oslo from 1986 until April 1989, retiring in August having served 42 years.

He became Colonel Commandant of the Parachute Regiment in 1983 until 2000, with  Lieutenant General Sir Michael Gray deputizing for him whilst he was in Oslo.  This was by far the longest tour of duty by any Colonel Commandant.  Fortunately, he was able to conduct his duties in 1990 and lead the Regiment and Airborne Forces in the 50th Anniversary of the Airborne Forces, when a considerable number of serving and past members of the Regiment and Airborne Forces, together with allied Airborne representatives, took part in the main central events in Aldershot and at St Paul’s Cathedral, both of which were attended by HRH The Prince of Wales, The Colonel of the Regiment, and the latter including a march through the City of London, following the award of the Freedom of the City.  There were also major regional events, a Red Beret Rose created in Lord St Oswald’s Nostell Priory Garden, a special Cartoon book an the creation of the Airborne Forces Charities Development Trust whose first Chairman was Major General Glyn Gilbert, which raised considerable sums of money  for the Regimental Charities before becoming a removed charity in October 2005.

On retirement, he undertook the appointment of Chairman of the Leonard Cheshire Foundation and for several years at time of great change for all charities and in particular for the caring charities.  He had been President of both the Army and Combined Services Cricket, and a longstanding member of the MCC, and was able to enjoy more cricket at Lords, as well as game shooting and attending horse racing. 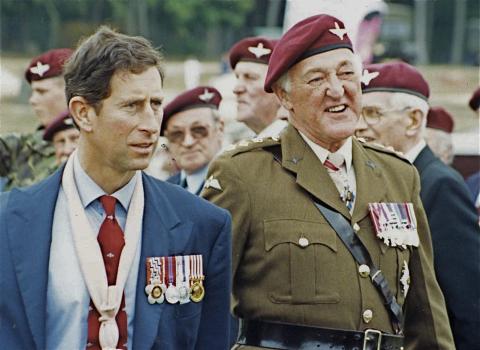 Paradata Editor said:
Profile photo of Col Commandant Gen Howlett and Commander-in-Cheif HRH Prince of Wales on Para 90 at the Aldershot Arena, June 1990.
Richard Watt said:
I think he was only Col Comdt of PARA Regt until 1990 (not 2000) as stated. He will celebrate his 90th Birthday on 5 Feb next week.
Add your comment