The ‘Emergency’ was the unofficial war conducted against Communist infiltration into Malaya between 1948 and 1956. Jungle areas were dominated by Communist Terrorists ‘CTs’ who press-ganged the local Aboriginal tribes for labour. 22 SAS sought to operate in deep jungle considered safe by CTs, destroy their cleared cultivations areas or ‘Ladangs’ for food supplies, ambush gangs and assist abused native tribes.

The Independent Parachute Squadron joined the SAS for operations in 1955 following preparatory jungle training. It consisted of an HQ Troop and four ‘sabre’ troops of 14 soldiers sub-divided into three patrols. These patrols penetrated deep jungle on foot, by parachute drop or helicopter insertion. Carrying a variety of weapons and two weeks' rations they were re-supplied by air. Jungle patrolling is arduous, lonely, hazardous and often unrewarding; 500 hours of patrolling was required on average to achieve one ‘contact’ with the enemy.

The squadron spent most of 1955 patrolling the Iskander swamps of southern Malaya and then the southern Selanger swamps of Tasek Bera. The task was to gain information, destroy Ladangs and terrorist bands through ambush and rescue oppressed Aboriginals. The aim was to force the CTs to jungle fringe areas where they could be mopped up by conventional security forces. Most of the second year of the deployment was spent in the mountain area between Ipoh and the Cameron Highlands, where some successes were achieved.

In April 1957 the Squadron tour expired and it was disbanded. Troops were returned to the UK and re-posted to their parent units. 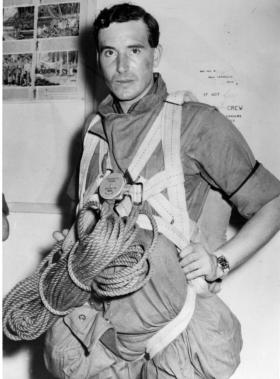 During the Malayan Emergency (1948-1960) 22nd SAS developed a method of inserting patrols by parachute into dense jungle.  Instead of an approach march of several days, a patrol could b