Edward Wagstaff came from Yorkshire and was enlisted into The West Yorkshire Regiment (Prince of Wales's Own) during World War II.

He was later attached to airborne forces, serving with 5 Platoon, B Company, 7th (Light Infantry) Parachute Battalion during Operation Varsity in March 1945 and the subsequent advance.

B Coy HQ, No 5 Platoon and No 4 Platoon bore the brunt of the casualties at the bridge, including Pte Wagstaff who was killed as a result of the bridge detonation.

Pte Wagstaff died on the night of 7/8 April 1945, aged 18 years,  and was given a field burial next to the bridge along with the other members of B Coy who were killed. He is now buried at Becklingen War Cemetery overlooking Luneberg Heath, Germany. 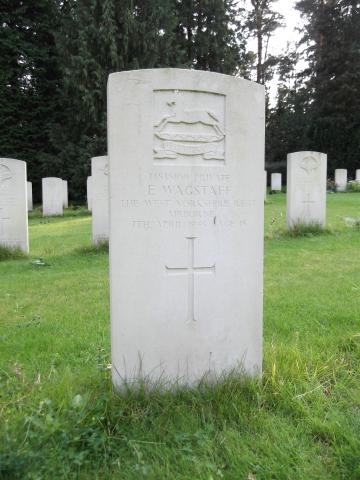