Born in Hankow, China, in 1918 of Australian parents, Derick Reid was sent to England for medical treatment at the age of six. He subsequently received all his schooling in Sussex, where he developed his lifelong loves of the countryside and of all sports, being a useful cricketer and soccer player.

Soon after leaving Lancing College he joined the London office of the Hong Kong and Shanghai Banking Corporation where amongst his friends was Jack Grayburn, later to win a posthumous VC on the bridge at Arnhem. With war looming he enlisted in the London Rifle Brigade in 1938 and in 1940 was commissioned into the newly-formed 10th Battalion of the Somerset Light Infantry engaged until 1942 in training and beach defence. It was during this time that he earned his nickname of 'Tiger', having evidently made a deep impression on a visiting General with his enthusiasm at bayonet practice.

In November 1942 his battalion was converted to the 7th (Light Infantry) Para Bn. Promoted to Major, he spent a year as the Chief Instructor of the Airborne Battle School at Hardwick Hall, Derbyshire, a time he would later recall with great fondness. Returning to his Battalion in command of B Coy in October 1944, he was soon to see active service in the Ardennes in the winter of 1944-45 as part of 6 AB Div. Only a month after returning from the Ardennes he dropped with the Division into Germany at the Rhine Crossing on 24 March 45.

The climax to his war came on 7 Apr 45 – Jellalabad Day for the Somersets. When the Bn was ordered to seize at all speed the bridge over the Leine at Neustadt-am-Rubenberge, not far from Hanover, it was unexpectedly caught in its transport by concealed machine-gun and panzerfaust positions as it crossed the runway of the airfield at Wunsdorf. The leading vehicles, which included those of B Coy, came under concentrated crossfire and with only their vehicles and a shallow ditch for shelter the Coy quickly suffered considerable casualties. Implementing a simple but effective cover plan, small parties from further down the column were able to work their way across the open airfield to clear the position, supported by the 2" mortars of the leading vehicles and Churchill tanks of the 4th Grenadier Guards.

Despite the losses in the sharp battle just fought, as night fell B Coy marched on its objective, still several miles distant. Aware that it had been prepared for demolition and without any element of surprise, his leading platoons were nevertheless able to rush the bridge, hurdling low wide walls of prepared explosives whilst under fire from the further end.

A tenuous bridgehead was somehow established before the charges detonated, causing heavy casualties amongst those still crossing. The bridgehead was however held, the wounded evacuated and some 24 hours later the Division was able to continue its advance across the patched-up bridge.

For his outstanding leadership, presence of mind and personal gallantry that day, Derick Reid was awarded the Military Cross.

Although the European war was soon to end, by July the Bn was on its way to India for jungle training preparatory to its third campaign of the year, the recovery of Malaya and Singapore from the Japanese. On 9 Sep 45 they took part in Operation Zipper, landing on Malaya by sea at Morib Beach, by which time the dropping of the atomic bombs had already forced their enemy's capitulation. Many months of internal security work were however to follow in Malaya and Singapore and also in Java in support of the Dutch.

In two curious footnotes to his military career, he was with the Battalion at Semarang, Java, when it became necessary to rearm Japanese PoWs, such was nationalist hostility to the returning Dutch. He also arrested Hatta, Soekarno's deputy head of the Indonesian independence movement. After this very tense period, he finally left his Bn in Semarang in February 1946 and was at last demobbed in Singapore on 14 Mar that year.

The following day, still in jungle green, he reported for duty at the Kuala Lumpur office of his bank, having hitched a lift upcountry in an army truck. He was to serve HSBC in Malaya, Singapore, British North Borneo and Hong Kong until his retirement in 1971, as manager of the business in peninsula Malaysia, 26 years after he had first waded ashore. During much of this time a State of Emergency had existed as communists sought to seize power in a savage and ultimately fruitless guerilla war.

The three children of his marriage to Colina in 1947 were all born in Malaya and Singapore during these turbulent years. Later, in more peaceful times, he was President of the Singapore Cricket Club in 1967-8 and under his guidance began this famous club's evolution from an expatriate sports club into a more broadly-based establishment, better in step with the changing social and political climate of the former colony.

On his final retirement to Sussex in 1975 he devoted much of his time to local matters, being for many years a parish councillor, treasurer of the village hall and secretary of the cricket club until Colina's ill-health led to him relinquishing these responsibilities. He remained however a firm supporter of his Bn reunion association and became a regular visitor to Neustadt, with whom a most sincere 'bridge of friendship' has been built to honour those who lost their lives and the  townspeople who afforded them shelter and medical assistance on that fateful day.

At his memorial service, sixteen of his former Bn comrades formed a guard of honour and placed their wreath on his coffin with the family's flowers. The large congregation that day, of all ages and from all walks of life, was its own testimony to the enormous respect and affection in which he was held far and wide. 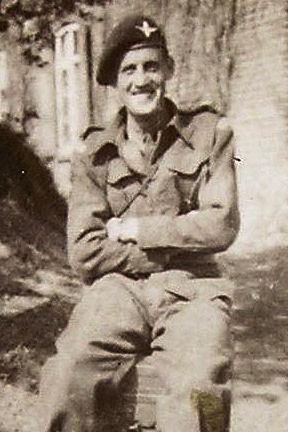