On leaving school he was commissioned into the RAF Regiment and posted to RAF Salalah, then under  constant threat from guerrilla attack. He also saw operational duty in Northern Ireland. After three years he opted to transfer to The Parachute Regiment and convert to a Regular Commission by studying at the Royal Military Academy, Sandhurst.  He took up free fall parachuting and would spend most weekends at Netheravon.

He was notified that he had passed the Staff College examination before departing with 2 PARA on the MV Norland to the South Atlantic, now Adjutant to Lieutenant Colonel H Jones, the Commanding Officer. He took his parachute with him ‘just in case’.

The Battalion was first ashore on 21 May 1982 and dug in on Sussex Mountain above San Carlos, with  a bird’s eye view of the continuous bombing attacks on the ships below. 2 PARA was ordered to capture Darwin and Goose Green and set off on a beautiful clear  evening. David looked up and sardonically remarked, “Just take a look at that night sky – it just might be your last”. For him it was.

The Battalion attacked on the morning of 28 May and by dawn, both lead companies were pinned down by very strong Argentine defences. David moved forward with the Commanding Officer’s Tac Party and joined A Company in the gorse gully below Darwin Hill. Lt Col H Jones became increasingly frustrated at the lack of progress and attempted a lone assault on the enemy and was mortally wounded in so doing.Shortly before this David crawled forward with the officers and soldiers of A Company to assault enemy positions which dominated the gully when he raised his head to observe the enemy and was instantly killed. Two other members of the ad hoc assault group were also killed: Capt Chris Dent and Cpl Chuck Hardman. The battle for Darwin Hill was to last for about three and a half hours without any fire support from either land or air forces, save for two medium mortars. By the end of this engagement eighteen Argentinians lay dead and over half of the seventy four remaining Argentinians taken prisoner were wounded

David's body was repatriated to Scotland where he was buried alongside his ancestors. Of him, one is reminded of the  words of the philosopher, Erasmus: ‘Live every day as if it might be your last -  study as if you might live forever’. 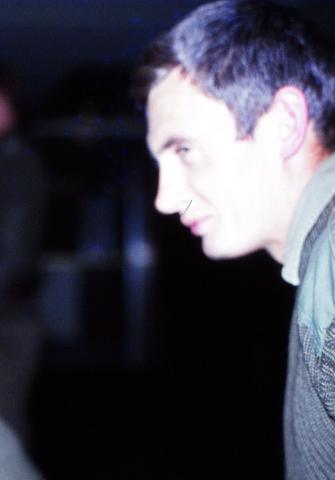 Steven James Hughes said:
It was my honour and privilege to serve with David Wood in the frenetic last months of his packed life.
When I joined 2 PARA as it's doctor I had little if any idea of how the "system" worked. David taught me how it worked, but more importantly, how to change it.
Over a bottle of whisky one night in the Mess Bar we "brainstormed" how you translate "directives" into "immediate action." The 2 PARA concept of "battlefield resuscitation" arose from that night, (and survived the hangover of the next day!)
My last but one memory of David is at Coronation Point; he was joking about the poor quality of the Argentine ammunition. My last memory is of a man "at rest" doing what he had been born to do.
My youngest son is named in David's honour. He is beginning to understand in whose footsteps he is treading.
Add your comment