David Ray Coupe enlisted into the Corps of Royal Electrical and Mechanical Engineers (REME) in May 1952. He volunteered for airborne forces in early 1953.

Craftsman Coupe undertook jump training on course 354 at RAF Abingdon from 25 April to 22 May 1953. He was posted to 16 Para Light Aid Detachment (LAD) REME, and saw active service in Cyprus and Suez.

From 1960 he served at RAF Old Sarum at the Army Air Transport Training and Development Centre (AATDC) until 1968. He then served with Workshop Squadron, 1 Parachute Logistic Regiment.

Having completed a weapons artificers course, he served with an armoured brigade in Detmold Germany.

After leaving the army he worked in Oman and Iran until his death in 1982. 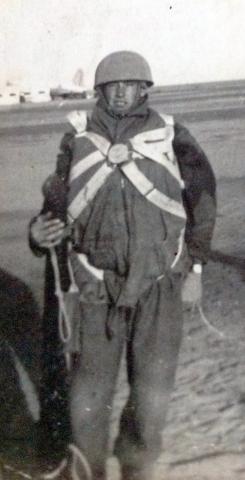 John Watkins said:
I took this photo of my boss Dave Coupe, in the Armourer’s Sop at Flax St Mill, Ardoyne, Belfast. Just beyond Dave’s left shoulder was my bunk, as L/Cpl Armourer, this was my abode, on more than 1 tour. A great man, I have visited his grave at Aldershot Military Cemetery.