Lt Col Radbourne graduated from the University of Northumbria in 1993 with an Honours Degree in Sports Science.

In 1995 he commissioned into the Parachute Regiment. As a Platoon Commander (Pl Comd) in 1 PARA he deployed to Northern Ireland and the USA, where he took part in the largest airborne exercise since WW2. Further Pl Comd appointments followed at Army Training Regiment (ATR) Lichfield, training Phase 1 PARA recruits and as the Regimental Signals Officer (RSO) of 3 PARA.

As RSO in Allied Mobile Force (Land) (AMF(L)) role he deployed to Norway and numerous overseas exercises around the world.

As an OC in 2 PARA he deployed to the Iraqi Western Desert on Op TELIC 7 conducting Secruity System Reform (SSR) and stepping up as Chief of Staff (COS) Task Force MUTHANA, working with the Provisional Governor, Head of Police and the Iraqi Army Brigade Command to help deliver the elections in 2006.

In 2006/7 he commanded the Parachute Regiment Training Company at ITC Catterick, overseeing significant structural changes to the programme and approach to training.

In 2007/09 he ran the PARA/Royal IRISH desk at The Army Personnel Centre Glasgow and also oversaw the Infantry E1 liability.

In 2009/10 he deployed on Op HERRICK 11 as an individual augmentee as part of the Operational Mentoring and Liaison Team Battle Group (OMLT BG), to assist the development of the Afghan Army in Helmand Province.

On his return he was assigned to the Counter Insurgency Centre in the Land Warfare Development Group as the Executive Officer, to help develop, promulgate and teach UK COIN (Counter Insurgency) doctrine to the wider army, defence, international partners and academic think tanks.

In 2011 he moved to 3 PARA as Battalion Second in Command (2IC) and was COS of the Airborne Task Force, helping re-establish the Army’s only high readiness contingency force after 6 years of hibernation.

In August 2011 he took over Senior Division and the Chief Instructor of the Infantry Battle School. 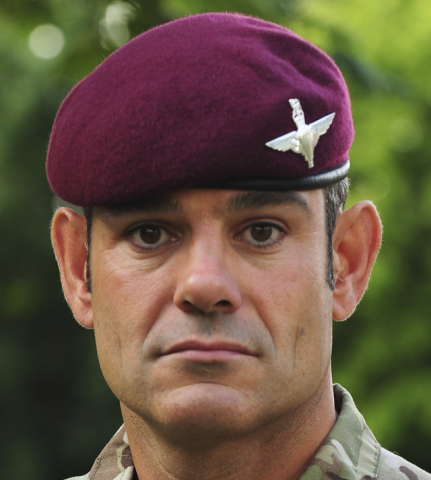