Donation to SUPPORT OUR PARAS at Merville Barracks, 15 January 2016. 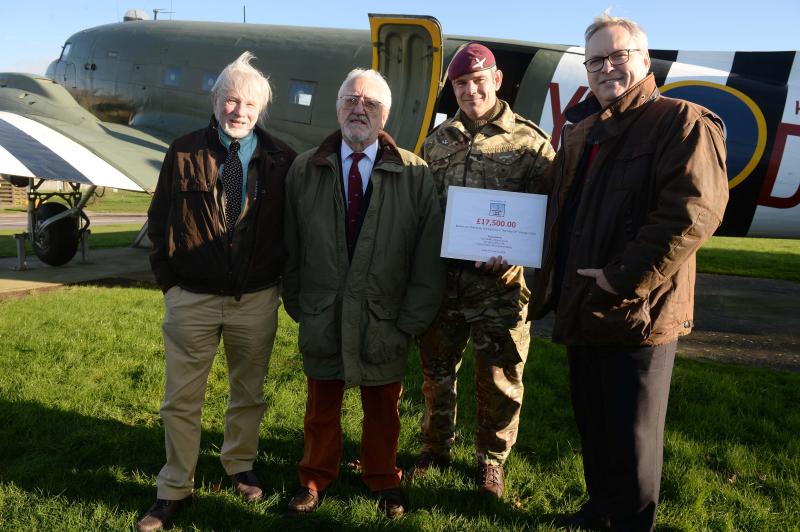 Dr Who and The Wombles star Bernard Cribbins OBE has visited Colchester's Merville Barracks to relive his days as a paratrooper.

Mr Cribbins did National Service with 3rd Battalion, The Parachute Regiment between 1947 and 1949, serving in Palestine and Germany. A training report described him as “a good performer”, a label which he took forward into a stage and screen career.

Today’s (Fri 15 Jan) visit saw Mr Cribbins climb aboard the barrack's Dakota - the aircraft from which he would have jumped from - and meet the current crop of 3 PARA soldiers and see the weaponry and equipment they use. The 87-year-old presented £17,500 to the Regiment's official charity Support Our Paras, which was raised through a fly fishing event at Duncton Mill Fishery in Sussex in October. The event had been organised by Iain Liddell, chief executive of logistics firm Uniserve and Peter Cockwill, of Albury Game Angling.

Mr Cribbins said: “Once a paratrooper always a paratrooper. It is something that you chose to do and that means you have made a choice to become something special. I had been acting in repertory theatre before I joined the Army and that gave me discipline, but the Paras really cemented it in me. The discipline to make sure you play the part that other people are relying on you to do is the same in the Paras and acting."

“It’s been wonderful to come and visit The Parachute Regiment again. I’m equally delighted to present money to Support Our Paras to fund the excellent work the charity does. The credit for raising the money belongs to Iain and Peter and we are hoping to run another fundraising event soon.”

Lieutenant Colonel Bruce Radbourne, Regimental Lieutenant Colonel of The Parachute Regiment, said: “It has been a pleasure to host Bernard Cribbins and show him how The Parachute Regiment has changed in the last 70 years, while also maintaining our proud heritage and traditions. The hard work that has been put into raising such a fantastic sum of money for Support Our Paras is hugely appreciated and demonstrates the close and supportive bonds that there are between all ex-paratroopers."

“We would like to think that Mr Cribbins’ time with The Parachute Regiment gave him the determination, discipline and humility that he needed to go on and forge a varied and successful career in show business.”