Bernard Cribbins was born to John Edward and Ethen Cribbins in Oldham.

He volunteered for The Parachute Regiment in 1947 after being called to the Army for his National Service.  Private Cribbins attended parachute training course number 221B at RAF Upper Heyford between 19 July and 13 August 1947. His course report states that he was a ‘good performer. Well disciplined. A likely NCO’.

He recalled one particular event in Haifa: ‘I was walking to the cookhouse to collect the tea in a big bucket. There was a glow in the sky and I thought how romantic it was, sunrise over the Mediterranean. It turned out the Naafi was on fire.

‘The problem was that the Naafi was next door to the armoury, which was housed in two wooden huts. The RSM…had men in their pyjamas and less, getting the ammo out of the huts and stacking it across the road.

‘We were pulling out boxes of bombs…the ceiling caught fire and we stopped and ran. Two minutes later…the explosion destroyed the cookhouse and the Naafi.’ (Soldier Magazine November 2000 p40).

Pte Cribbins returned from Palestine in 1948, and was part of the battalion’s guard of honour for Field Marshal Montgomery. He only managed to perform part of his duties however, as the soldier on his right accidentally stuck his bayonet through Pte Cribbins’ hand, and FM Montgomery insisted he fall out.

Pte Cribbins served in Germany before being demobilised in 1949. After his demobilisation, Bernard continued with his acting career, working in theatre before moving into film and television. His roles include narrating The Wombles, Perks in the film The Railway Children and Wilfred Mott in the television series Doctor Who.

On 5 June 2014 Bernard visited The Airborne Assault Museum at Duxford to film for Celebrity Antiques Road Trip. He was shown his jump records and tried on old kit.

By Rebecca Blackburn with information supplied by Soldier Magazine, November 2000 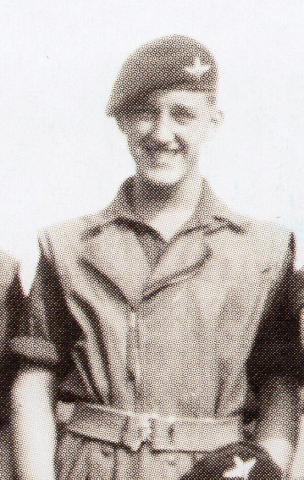