Wilfred Fordham was born in December 1919. After leaving school, he initially joined Hertfordshire Territorial Army, called up in September 1939, two days before war broke out. After early postings to Harwich and Northumberland, Wilfred returned to Bedford to join the Bed and Herts Regiment at Bedford Barracks.

During this time, he took part in numerous training exercises. Wilfred was posted to March, near Ely, and promoted to a Lance Sergeant training new recruits. Further posting followed to Peterborough. and later to Aldburgh, Suffolk. By 1943 however, he was keen to take on a new challenge and volunteered for Airborne Forces.

By late 1943, 1st Airborne Division had joined to the Allied landings in Italy, and Wilfred travelled in a ship convoy to Taranto, on the East coast of Italy. Wilfred joined up with troops of 1st Airborne and helped in the fight through Italy. In December 1943, 1st Airborne were returned to the UK, and 5th (Scots) remained as part of the new 2nd (Independent) Parachute Brigade to fight on in Italy through the Winter of 1943-4 and into the following year.

Soon afterwards, Wilfred took part in Op Manna to Megara, Greece as part of the operations to harrass the German withdrawal and help restore civilian order as the Greek People's Liberation Army (ELAS) threatened civil war, fighting for three weeks at the Acropolis. As the fighting progressed, he was fortunate to escape harm when aboard the troopship Prince Harry bound for Salonika, and remembers disembarking by small boats to avoid the mined harbour, as they continued their actions against the ELAS into 1945. Shortly afterwards, their return to Italy onboard the Princess Catherine was curtailed, as the Battalion returned to Greece to contain further ELAS uprisings.

Finally, as the War in Europe in May, the Battalion returned to Italy, via Naples, and on to the UK. Wilfred took the chance to get married (and was granted a few precious days off!), before the Battalion was deployed once more.

Shortly after the end of the war, as a significant reorganisation of Airborne Forces progressed, Wilfred returned to the Mediterranean. He was now sent to Palestine, assigned with the Battalion to 6th Airborne Division at Haifa, Palestine (now Israel) and Gaza.

Wilfred eventually returned the UK, and was demobbed in the late 1940s in Woking, retained on the reserve list until around 1950.

Wilfred and his wife were able to set up home, bringing up their family as he enjoyed a full career before retirement. 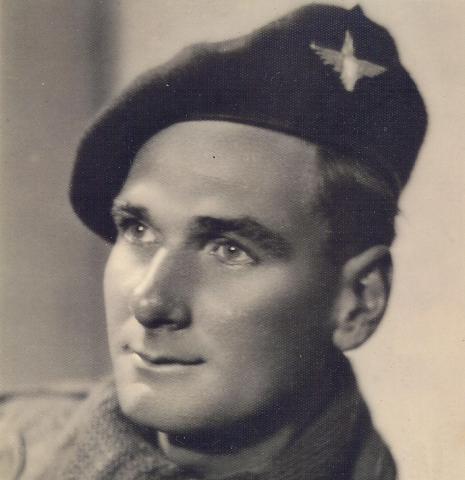