Graham Mills had a long and distinguished Army career, commissioned before the Second World War through service in India and Burma, an Airborne career in the 1950s and 1960s before retiring to work for Leonard Cheshire homes for the disabled. As described in his Pegasus obituary in 1992:

"Graham Mills was a man of paradox. In his younger days, he was and looked the classic military officer of the 1930s;[...]a disciplinarian who demanded the highest military and personal standards and expected others to do the same. Yet after he retired from the Army he devoted himself in a most caring way to the Le Court Cheshire Home, where he was a popular warden for five years, and to Park House, Sandringham as a member of the management committee which set up this country house hotel for the disabled after it had been donated by the Queen to the Cheshire Foundation.

The link between the two facets of his character was a kindness and honesty of purpose. He was a quiet, practical man of few words, who was good with his hands and with people. His strength lay in man management, which was reflected in his success as Adjutant of his Regiment in the 1940s and with the disabled in the 1970s."

William Graham Stead Mills was born in June 1917, son of William Stead Mills, of Halifax, and was educated at Merchiston Castle School. Edinburgh. He was reading agriculture at Reading University in 1938, when the Munich crisis led him to abandon his degree and accept a regular commission in the local Royal Berkshire Regiment. Serving in the 1st Battalion, his first Commanding Officer, Miles Dempsey, (who later commanded the British Second Army during the D-Day landings) told him on joining ‘the sky’s the limit!’.

Graham served throughout the Second World War in India and Burma. Mills left for India to join the 2nd Battalion at Lahore in 1939, and two years later became their Adjutant in Bombay. His days with his Regiment ended in 1944, when he went to the Staff College at Quetta. From there he was posted to 14th Army HQ in Burma, serving under General Slim, first as GS02 (Ops) and then as SO1 (Ops) through the reconquest of Burma. He was present at Singapore on 12 September 1945 on the occasion of the surrender of the Japanese Expeditionary Forces.

After the war ended he worked for two years in the War Office with the Military Intelligence Directorate and was then seconded as an exchange officer in the US Army Intelligence in Washington for three years. On leaving for Washington, Gen Sir Gerald Templer, Director of Military Intelligence at the time, informed Graham that he did not expect to hear from him. His priority was to integrate himself with his hosts!

Returning to England in 1950, Graham began his Airborne career. He volunteered for service with The Parachute Regiment and joined the 2nd Battalion as a Company Commander, following completion of the pre-para selection, ‘P’ Coy, as a 33 year old! He was a direct contemporary of Michael Forrester’s (who later commanded 3 PARA and 16 PARA Brigade) and they remained friends thereafter. Michael Forrester later contributed to his obituary in Pegasus, and represented the Parachute Regiment at Graham's memorial service in Norfolk.

Mills served as a Company Commander, and later as Second-in-Command (2-i-c) of 2 PARA, and was Acting Commanding Officer between 1955-6. He was then posted again, regaining his wartime rank of Lieutenant Colonel as GSO1 to 2 Division in the British Army of the Rhine (BAOR) in 1956. He returned to the UK to command 17 PARA (TA) at Gateshead from 1958-60, before a spell as Regimental Colonel of the Parachute Regiment where he gained the reputation of providing excellent support for the parachute battalions operating overseas during the counter-terrorist campaigns of the early 1960s. It was also during this time that the command structure of the Regiment was being transformed. As Gen Sir Kenneth Darling, the Colonel Commandant, orchestrated the removal of the old system of secondment to the regiment, Mills helped establish the new structure introducing a permanent officer cadre. A widely respected figure within the Regiment, when he left his post the officers of the Regiment presented him on leaving with a silver salver inscribed ‘Well Paddled!’, in affectionate reference to an expression of encouragement he habitually used towards others.

Leaving the Airborne fold, he commanded 128 Brigade (TA) Winchester, before becoming a Brigadier General Staff (BGS) at Headquarters Middle East Command in Aden, during the last turbulent years before the end of British rule in 1967. He attended the Imperial Defence College in 1967, and finally became General Officer Commanding, West Midland District before leaving the Army in 1970.

After leaving the Army, he chose a very different path and worked for many years for the Leonard Cheshire Homes for the disabled including five years as head of the flagship home at Le Court in Hampshire, and later during his retirement as a member of the management committee for Park House, Sandringham where he was much loved and respected by both staff and residents.

Graham met and married Joyce, who was serving in Queen Alexandra's Nursing Yeomanry whilst in India during the war. Throughout his career he was supported by Joyce who with their three sons, Richard born in India, Peter born in England (who would later serve in No 1 (Guards) Parachute Coy) and David born in Washington.

In later life he moved to Norfolk and following Joyce's death in 1981, he re joined the Cheshire Foundation as a member of the management committee of Park House, Sandringham.

Graham Mills died in 1992. As Michael Forrester commented, he was a man of 'integrity, loyalty and fairness'. A well-attended Service of Thanksgiving celebrated his life at St Margaret's, Saxlingham of which he had been a dedicated Churchwarden for many years in early August 1992, and was a fitting tribute to his life.

With thanks to Lt Col Peter Mills 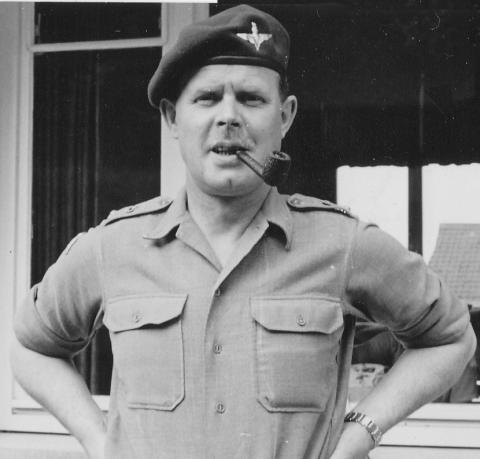