Vincent Francis Paul Miller was granted an emergency commission with the Royal Artillery in April 1940 and was initially posted to 58th Anti-Tank Regiment, Royal Artillery.

In 1943 he deployed as part of the British North African Force with the rank of Temporary Major.

He was wounded whilst serving with the Central Mediterranean Force in Italy in October 1943 and later awarded a Mention in Despatches, which was reported in the London Gazette in August 1944.

He remained in the Army after the war and was granted a regular commission in 1947 and also saw operational service in Korea..

Miller retired from the Army in 1963 with the honorary rank of Major. 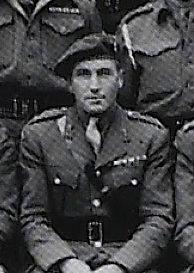