Tommy Kelly served with Airborne Forces with 7th (Light Infantry) Battalion during the Second World War, before spending many years as an Airborne Territorial in 15th (Scottish) Battalion until 1958.

Tommy Kelly was born in Airdrie, Scotland on 2 April 1920. He initially enlisted in the Territorial Army with the Royal Artillery before being mobilised to a regular unit as the British Army prepared for war in 1939. He served with a Searchlight unit in the Royal Artillery on air-raid defence duties in the early stages of the war, before transferring to the Duke of Cornwall's Light Infantry.

In 1944, Private Kelly volunteered for Airborne Forces. He completed Parachute Course 114 at RAF Ringway in mid-May 1944 with the pass comments: 'Very enthusiastic pupil. Well disciplined. Good performer'. After a spell with the No 1 Airborne Force Holding Unit prior to being assigned to a Parachute Battalion, he is believed to have been posted to the Signals Platoon, HQ Coy, 7th (Light Infantry) Parachute Battalion in August 1944.

Joining the Battalion as a late reinforcement, records indicate he was sent to Normandy and served with the Battalion in the latter stages of the Normandy campaign. After the Battalion returned to the UK with the rest of 6th Airborne Division in September, their next deployment came to the Ardennes region of Belgium, in response to the German counter-offensive in Winter 1944-5. Soon afterwards, the 6th Airborne Division undertook the last major British Airborne operation of the War on the Rhine Crossing, during Op Varsity, before taking part in the advance to the Baltic. 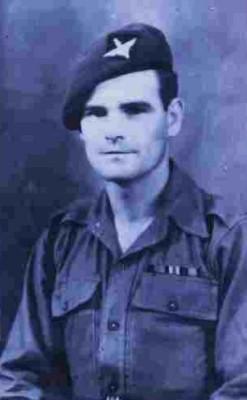