Richard Noel Fry was granted an emergency commission as a Second Lieutenant in the Royal Armoured Corps on 18 July 1943.

Later in the year he volunteered for airborne forces and qualified as a military parachutist on course 90 which ran at Ringway in November 1943. The course instructors' notes record that he was "confident and capable, an excellent performer, and highly recommended."

He was posted to the 8th (Midlands) Parachute Battalion and assigned to command 3 Platoon, ‘A’ Company.

Richard took part in the 6th Airborne Division’s operations in Normandy in June 1944, when the battalion was assigned DZ K and tasked with protecting the beachhead for the main Allied landing force.

Later that month elements of the battalion, including A Company, repulsed a major attack by German forces, which resulted in six gallantry awards (Military Crosses to Lts Fry and Miller and Military Medals to Sgt Reading, Sgt Mayhew, L/Sgt Littlewood [HQ Coy] and Pte Lewis).

The citation for Richard's award notes:
“For outstanding bravery and leadership. At Le Mesnil on the 16th June, Lieutenant Fry was in command of a forward platoon which was repeatedly attacked by superior numbers of the enemy for a period of eight hours. When the Platoon position was under heavy mortar and machine gun fire, Lieutenant Fry showing a complete disregard for his own safety, walked about encouraging his men. It was due to Lieutenant Fry's courage and leadership that the enemy were unable to penetrate his position. On previous occasions Lieutenant Fry has shown courage and daring in leading patrols against the enemy.”

Richard  was subsequently wounded on 27 June while advancing to clear a farmhouse of enemy troops, and evacuated to a field hospital.

He recovered from his wounds and returned to active service, later serving in Palestine prior to demobilisation with the honorary rank of Captain.

After the war he served as an adult instructor with Christ’s Hospital (Horsham) Contingent of the Combined Cadet Force from 1958 until 1972.

Compiled by Harvey Grenville with the assistance of Bob Hilton.

The 3rd Parachute Brigade, in which Richard Fry commanded a platoon in the 8th Parachute Battalion, endured a dispersed landing in Normandy in the early hours of D-Day.

The three sections of No 3 Platoon A Company, 8th Para Bn, crossed the Normandy coast in separate Dakota aircraft each dropping a clutch of fifty pounders to suggest that they were on a bombing mis 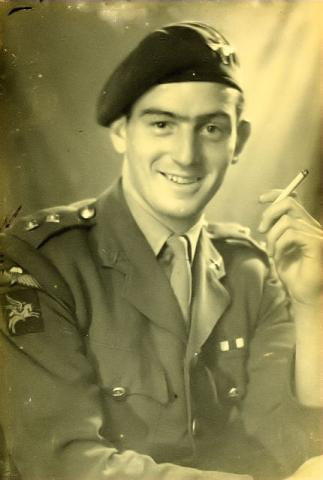