Richard (Dick) A J Bingley joined the Territorial Army in 1938 as a member of Machine Gun Battalion, Middlesex Regiment .

In January 1940, he was a Sergeant with the British Expeditionary Force (BEF) in France. He was wounded by a mortar grenade on 27 May and was evacuated via Belgium. After being discharged from hospital in October 1940, Sgt Bingley transferred to the newly formed No.2 Commando, which later became the 11 Special Air Service (SAS) and then the 1st Parachute Battalion. Bingley was appointed T Company Sergeant .

Sgt Bingley attended an officers training course at Aldershot in 1942. As 2nd Lieutenant of S company, ‘Dick’ Bingley dropped into Sicily, where on 14 July he sustained a second hand injury during the recapture of two pillboxes at Primosole Bridge. On the 1 October, Bingley was promoted to Lieutenant. After a second operation to his hand, during rehabilitation, Bingley was posted to the Parachute Training School at RAF Ringway.

Lt Bingley saw active service again in 1944 with S Company. On 17 September he was dropped into Arnhem , two days later on the 19 September he was again wounded, this time in his right hand and left ankle and was taken a prisoner of war. After being liberated on 11 April 1945 he was taken to an English hospital where he stayed for some months.

In 1946 Lt Bingley was demobilised but he went on to re-join the Army in 1949 as an intelligence-officer. In November 1951, as a Captain he was second in command of B Coy, Welsh Regiment with British Commonwealth Division in Korea. On 23 June , 1952 Captain Bingley was injured for the fourth time in his military career, when hit by several bullets and lost his left eye during an attack on a hill manned by the Chinese. In spite of his injuries he succeeded in holding the hill for four hours and realising his aim: the taking of prisoners.

Capt Bingley was Mentioned in Despatches for recognition of gallant and distinguished services in Korea, during the period 1st July to 31st December1952, as reported in The London Gazette 24 April 1953. Capt Bingley's active service ended in 1952, however, his military career continued until he retired his commission from the Royal Corps of Signals in September1972.

Report about the experience of the 6th Platoon S Company of the 1st Para battalion by : Captain Richard Bingley. 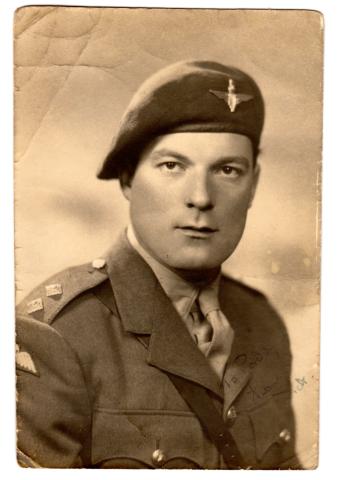