Nicky Mason was from Aveley in Essex. In December 2001 he joined the Army and after completing his training was posted to 12 Platoon, D Company, 2 PARA in July 2002.

In October 2003 having successfully passed the selection cadre he joined the battalion's Specialist Reconnaissance Platoon.

He was promoted to Lance Corporal in 2005 shortly after completing his Regimental Junior Non-Commissioned Officers' Course. During his time with the regiment he had completed an operational tour of Northern Ireland and two tours of Iraq.

L/Cpl Mason enjoyed sports, representing both his company and battalion at Boxing and enjoyed Martial Arts.

On the 13 September 2008, whilst on a routine patrol, L/Cpl Mason died as a result of an Improvised Explosive Device (IED) near Kajaki, in the Helmand Province. He was 26 years old.

His funeral service was held at St Michael’s Church in Aveley.

"This afternoon X Company was conducting a patrol North West of FOB ZEBRUGGE, and as the Patrols Platoon cleared a key piece of high ground Lance Corporal Nicky Mason was killed by an Explosive Device. The Kajaki Dam has been in the news a great deal over the last few weeks, and the story has been of a major operation to move the third turbine up to the Dam, where in time it can provide much needed electricity for the rest of Helmand."

"The hidden story of the Kajaki Dam is the Company that patrols North and South of it daily, to ensure that the Taliban cannot bring heavy weapons within accurate range, so that the power station can continue to function. The ground X Company patrol is limited and predictable, and as a result the risk of attack from Improvised Explosive Devices is very high."

"X Company's task was essential to the operation to move the turbine up to Kajaki, and it is now essential for the work to install the turbine to begin. Nicky Mason knew these risks very well; X Company had already suffered the loss of Corporal Barnes and he and the rest of X Company have demonstrated a special kind of courage to face this threat each day."

"Those who celebrate the operation to move the turbine to Kajaki should now reflect on the steadfast courage of those who were there beforehand and who still remain, and on Nicky Mason who has given his life there. 2 PARA will remember him as it remembers all the other members of the Battlegroup that have lost their lives here this summer, and our thoughts are now with his family and their most painful loss." 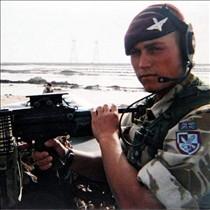