Les Morgan, fondly know as ‘Titch’ or ‘Jockey’ enlisted approx. 1941 as a Dispatch Rider into the REME and served in N Africa for the first part of his service. Jockey was quite frustrated with this solo role in a harsh desert environment and sometime during 1943 – 44 he volunteered for the 21st Independent Parachute Company who were also on operations in N Africa.

Being of short stature, the OC of the 21st, Maj ‘Boy’ Wilson, was said to be slightly wary of how Jockey would cope with the arduous physical Airborne training and conditioning. But it transpired that Jockey had actually raced for Maj Wilsons father as a professional Horse Jockey, hence his nickname, thus building up rapport and trust. The OC passed him fit and he was placed into 3 Platoon of the 21st and became a very tough, able and diligent young Pathfinder. He was on parachute training course 106 at RAF Ringway which lasted from 6th March 1944 until the 16th March 1944. It was noted that he was "Full of confidence, very cheerful, jumped well in stick descents"

Jockey took part in Operation Market Garden, fighting in Oosterbeek with his Company and Platoon, managing to escape across the Rhine on the evening of the 25/26th Sept. Post 1944 he went with the 21st to Norway as part of Operation Doomsday, where in his spare time there, he did race once more, making friends with a local lady whom he kept in touch with until he sadly passed away in April 2015.

After Norway it was to Palestine which Jockey described this as the worst posting of all and he stayed until the 21st was disbanded in 1946. Jockey returned to his former profession and kept in touch with his former comrades to the best of his abilities and was a keen member of the Liverpool PRA. But sadly age got the better of him in his later years. He would often visit the Parachute Regiment and Airborne Recruiting Sgts based in the Army Careers Office, Liverpool and join them for a pint and a story.

Very sadly missed still, Jockey received a proud send off at his cremation with a hundred or so family or friends and many former Veterans including a very fine group of 4 PARA soldiers in full uniform. Jockeys ashes are now interred in the Oosterbeek Military Cemetery immediately behind the headstone o former 21st IPC soldier, Pte JP Avallone , a plot reserved for other for the Ashes of other IPC comrades.

Finally, Jockey is mentioned and photographed in Peter Gijbel’s excellent book ‘Leading The Way To Arnhem’ which is a very detailed history of the 21st. 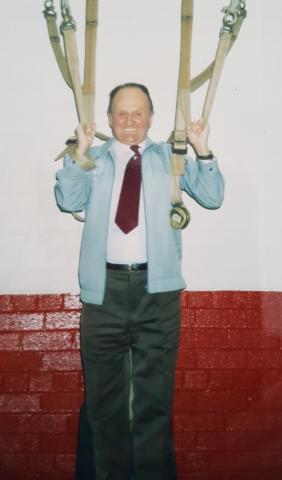