Maj Gen Urquhart received his orders in the midst of a Division reorganization. The 1st Parachute Brigade had been despatched to Denmark on 5th May, 1st Polish Brigade was alerted for an overseas move and the Special Air Service Brigade, then in Germany, was attached to the Division to compensate. Despite the chaos attendant within the fluid situation of the German defeat, 1st Airborne Division prepared and launched the Norwegian mission within four days of receiving the Warning Order.

Advance parties flew into Norway on 9th May but the Division follow-up was delayed by inclement weather. The task was to maintain law and order, secure airfields, prevent sabotage and oversee the German surrender. This was potentially a dangerous assignment as 6,000 airborne troops were being called upon to disarm and control 350,000 German soldiers.

The Division assisted in the recovery of prisoners of war, apprehended war criminals, allocated German units to staging reservations and employed them to disarm their own minefields.

Air accidents occurred resulting in the deaths of one officer and 33 men, the AOC 38 Group RAF was killed with six others killed and seven missing.

1st Airborne Division retained control until the arrival of HQ Allied Land Forces in Norway as well as conducting the welcoming ceremony for the return of the King of Norway from exile. 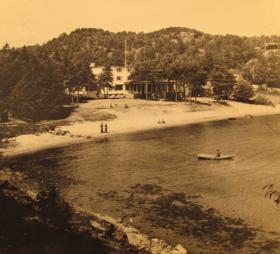 In May 1945 a country club was established on the coast of Norway for the rest and recuperation of men from The 1st Airborne Division. However it was also used by the locals too.

Officers and Men of the Company/Squadron who have been killed in action. Operation ‘Freshman’ which took place on 19 November 1942

'After Arnhem', a personal account by Sapper Alan W Gauntlet