John Michael Saunders was the son of Arthur James Saunders and Gertrude Laura Saunders; and husband of Margaret Rosemary Saunders, of Leytonstone, Essex.

He volunteered for airborne forces while serving with The Royal Artillery during World War II and qualified as a military parachutist on course 124 which ran at RAF Ringway in July 1944.

After qualifying Pte Saunders joined B Coy, 7th (Light Infantry) Parachute Battalion, and fought in the campaigns to liberate North West Europe from German occupation including the final mass allied parachute and glider assault of World War II, Operation Varsity, on 24 March 1945. By this time Pte Saunders was serving with 6 Platoon.

The museum’s records are incomplete regarding which incident resulted in the death of Pte Saunders, however there are strong indications that he was killed at Wunstorf airport, where 6 Platoon took two other casualties including their platoon commander, Ron Hinman. 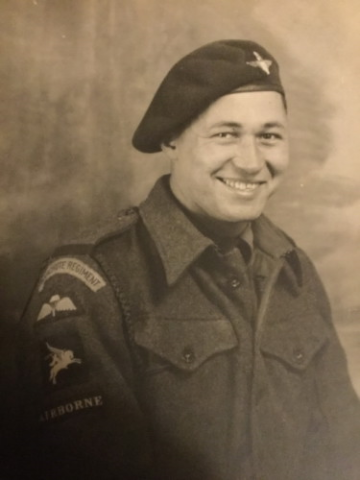