I was fortunate to serve three very different tours with airborne forces.

Having been commissioned into 10 Gurkha Rifles in 1967, I applied for a Parachute Regiment secondment in 1972 and spent a year as second in command of A Company 2 PARA, starting on Op Motorman in Turf Lodge, Belfast. Then after various overseas exercises we were back in Northern Ireland in 1973 with most of the battalion in South Armagh and A Coy in Armagh and later Portadown.

I left the regular Army in 1989 and joined the TA in Central Volunteer Headquarters, Royal Artillery, as a watchkeeper and liaison officer. From 1994 I was attached to HQ 5 Airborne Brigade and took a parachute refresher course as a result. When 16 Air Assault Brigade was formed I joined them in the same role.

With a flexible civilian job, I was fortunate to be able to take part in many exercises throughout the UK and overseas, including the first ever British military parachute jump into Switzerland, as well as Ex Purple Star in the USA, the largest drop since Op Varsity.

My last jump was at Arnhem in 2002 just as I retired from the TA, aged fifty five years.

I am now a committee member in the Inverness and Highland Branch of the PRA.

The emergency deployment was authorised in order to provide the resident Gurkha battalion with some much-needed respite, and 1 PARA arrived at Kai Tak Airport, Hong Kong on 3 February 1980 in bitter cold. 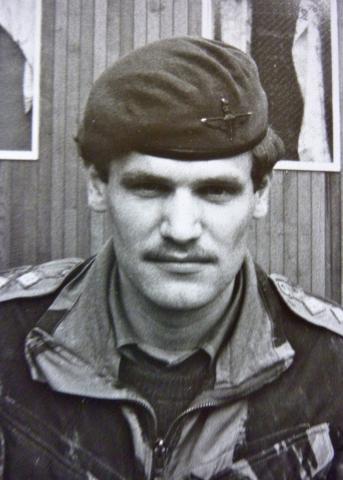