John Handford was commissioned into The Parachute Regiment on 13 June 1978. He initially served as a Platoon Commander with 2 PARA in Berlin and Northern Ireland.

For the latter posting he was Mentioned in Despatches. He was a platoon commander at Depot PARA with Junior Parachute Company and Recruit Company before being ADC to General Sir Geoffrey Howlett our Colonel Commandant at the time.

He then returned to 2 PARA as Patrols Platoon Commander and Adjutant. As a Staff Officer with 39 Infantry Brigade he was again Mentioned in Despatches before completing two tours as a Company Commander with 3 PARA and 1 PARA.

In the latter tour he was Mentioned in Despatches for the third time. In the mid to late 1990’s he carried out a NATO Staff Officer appointment, the Regimental Representative at RMAS, DCOS 160 Wales Brigade and Commanded the School of Infantry in Warminster.

He was appointed Honorary Colonel 4 PARA in 2015 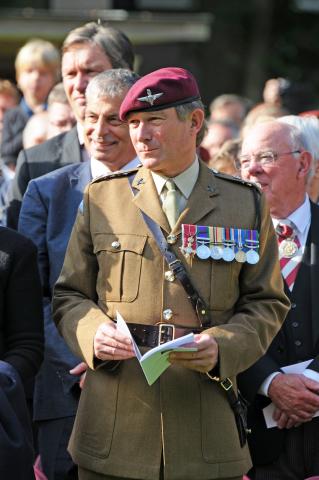