John Charles Pape was the son of John Andrew and Frances Pape; and husband of Velma Jeanne Pape, of Edmonton, Alberta.

He served as an officer in The Royal Canadian Infantry Corps and volunteered for the CANLOAN scheme during World War II.  (By the end of 1943, battle casualties had resulted in a shortage of junior officers in the British Army and a loan scheme was agreed with the Canadian Army to help fill this gap. Under the scheme 673 officers served on a voluntary basis in the British Army. 623 served in Infantry Regiments, although not all of these were Airborne.)

John joined B Coy, 7th (Light Infantry) Parachute Battalion as a reinforcement platoon commander in Normandy on 3 July 1944 and the following month temporarily took command of B Coy during a company attack on Germans occupying a farmhouse ('Bob's Farm') in Le Bois de Bavent, after the officer commanding, Major Keene, was injured.

The month after the battalion's return to the UK, John qualified as a military parachutist on course 138 which ran at RAF Ringway in October 1944.

He fought with the battalion in the Ardennes and later took part in the last major allied parachute and glider assault of the war, Operation Varsity – the Rhine crossing, on 24 March 1945, as commander of 4 Platoon B Coy.

A few days later on the evening of the 27 March, the brigade’s eastward advance was held up by light flak guns and enemy forces controlling a crossroads. A patrol commanded by John was sent out by the Commanding Officer to assist in the clearance of the guns' sites.

The battalion continued its advance eastward and by 7 April had reached Petershagen, in between Osnabrück and Hanover. It continued to proceed east by motor transport and encountered enemy forces defending Wunstorf airfield at around 14:30 hours, although earlier reconnaissance reports had indicated that it had been abandoned. John was killed in the resulting ambush of the leading elements of B Coy.

During the battle, in which the 13th Battalion was also engaged, the 7th Battalion lost 6 killed and 21 wounded, mostly from the initial ambush of the four leading trucks of B Coy. The airfield was captured with 19 ME 109s, 4 FW 109s, 2 JU 88s, 2 JU 52s and much other valuable equipment.

Lt John Pape died on 7 April 1945, aged 25 years, and is now buried at the Holten War Cemetery in the Netherlands. 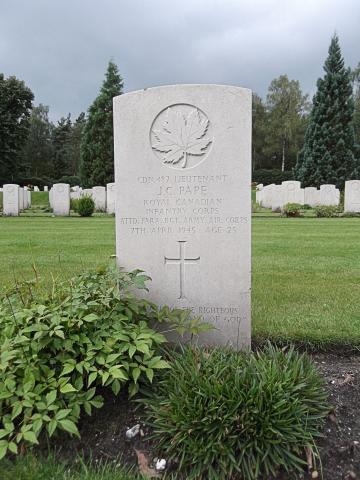 Kelly Pape said:
Thank you for all this information on my grandfather!
Add your comment