With the onset of the Second World War he enlisted into The Duke of Cornwall's Light Infantry in 1939. He was granted an emergency commission with The South Lancashire Regiment (PWV) 2/4 Battalion, in 1942. In the following year his battalion was converted to a parachute infantry role and became the 13th (Lancashire) Battalion, The Parachute Regiment (AAC).

On 6 June 1944, he parachuted in to Normandy as Operation Overlord as a Platoon Commander and later became Second in Command of A Company. He saw continuous service throughout the campaign before returning to Britain as Officer Commanding A Company in September 1944.

Maj Watson was soon back into active service during the Ardennes and Holland campaign (the Battle of the Bulge). He was awarded the Military Cross for his actions during the Battle of Bure (3-6 January 1945). Following a brief return to Britain he once more parachuted into action during Operation Varsity - the Rhine Crossing - and fought his way as Officer Commanding A Company across Northern Europe to the Baltic.

After the war, he served as Company Commander between 1945 and 1950 in the UK, Palestine, Airborne Forces Depot, Demonstration Coy, and at RAF Netheravon, Wiltshire. In 1946 he gained a regular commission from AAC to The West Yorkshire Regiment (PWO) whilst continuing to serve in The Parachute Regiment.

During 1950 to 1953 he served as Adjutant of 1st Battalion, The West Yorkshire Regt, in Austria and the Canal Zone. He later became a Company Commander in 2nd Battalion, The Parachute Regiment (1953-54). A posting as Staff Officer of Infantry and Officer Commanding Airportability Wing, AATDC, RAF Old Sarum, Wiltshire, followed.

His final army appointment, from 1957 to 1958, was as Company Commander, 1st Battalion West Yorkshire Regiment in the UK, before his retirement from military service.

Entering civilian employment later that year, he worked for J Lyons and Co Ltd (later Allied Lyons) until 1982 when he became Counsellor for the Allied Lyons/Allied Domecq Pension Fund.

Concurrently, he became the Leader of the Annual Airborne Normandy Pilgrimage and similar programmes which included visits to the Ardennes and Rhine Crossing locations, a position he held until shortly before his death. During this time he also became President of Airborne Assault Normandy Trust (AANT).

In 1992, he was awarded the Colonel Commandant's Commendation. This was followed in 2001 by the Fishmongers Trophy annual award by the Guild of Fishmongers to individuals who have made an outstanding contribution to The Parachute Regiment. In 2005, he was awarded Chevalier de la Legion d'Honneur and made Honorary Citizen of Bure and Tellin in the Ardennes whilst in 2006 he was also made an Honorary Citizen of Ranville, Normandy.

Compiled by ParaData Editor and Jack Watson with kind assistance of Tom Hughes for ParaData.

On January 3rd, 1945, Major Watson was commanding ‘A’ Company of a Parachute Battalion, which was leading the assault into Bure.  When the Company was formed up on the start line, very heavy and ac 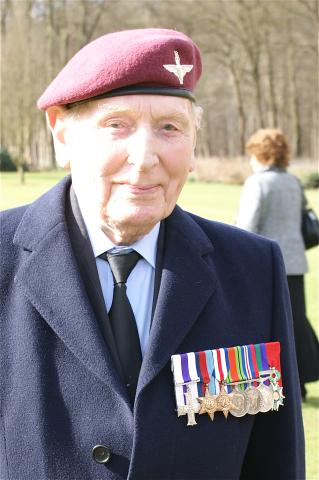