Harold John Skelton was born in Middlesex and resided in Berkshire prior to enlistment into the Army.

He volunteered for The Parachute Regiment while serving with The Ulster Rifles during World War II and qualified as a military parachutist on course 77 which ran at RAF Ringway in August 1943. The course instructors' notes record "outstanding in performance."

After qualifying Pte Skelton joined A Coy, 7th (Light Infantry) Parachute Battalion, and fought in the campaigns to liberate North West Europe from German occupation including the final mass allied parachute and glider assault of World War II, Operation Varsity, on 24 March 1945. By this time he had reached the rank of Corporal.

Pte Skelton appears to have died from wounds, possibly sustained at Wunstorf. As a member of A Coy it seems highly unlikely that he was injured by the bridge detonation.(A road mine detonation preceded this and injured two members of A Coy, however the battalion war diary records these men as only being stunned by the explosion.) 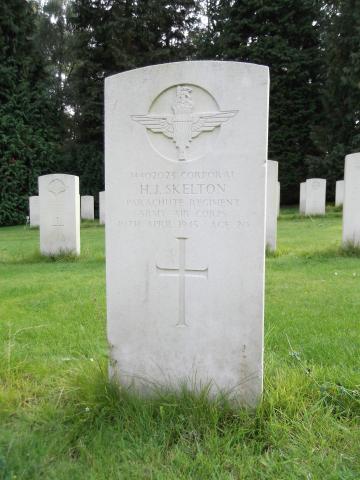