George Robert Flood was born on 26 November 1919 at Guildford, Surrey. The son of the Reverend J Flood, he lived in Australia for six years, but returned to England to attend Lancing College, before going on to study Horticulture at Reading University in 1938.

'Bob' Flood had been a member of the Officers’ Training Corps (OTC) at school and in 1939 he joined The Royal Berkshire Regiment with an Emergency Commission as a 2nd Lieutenant. He was posted to HQ Company, 4th Battalion, Royal Berkshires.

In 1940, as part of the British Expeditionary Force, 2nd Lt Flood accompanied his battalion to France and the Franco-Belgian frontier. Whilst leading a counter-attack on the Gort line of the frontier, he was wounded, losing the middle finger of his right hand.

He was evacuated back to England in the last hospital ship leaving from Dunkirk, and spent four months convalescing before rejoining his unit, now reformed as part of 148 Independent Brigade Group. Bob Flood served in the UK and Northern Ireland before learning mountain warfare in Iceland. Promoted to Temporary Captain in 1942 he became an Instructor at a Battle School in Llanberis  and then an Instructor at the School of Infantry's Night Fighting Wing in Teesdale.

In 1943 Bob Flood moved to the Airborne Forces Development Centre (AFDC) at Amesbury Abbey, Wiltshire, where he helped to develop weapons and equipment. Whilst based at the AFDC he qualified as a military parachutist, in spite of his damaged hand.

Temporary Major Flood was awarded a Military Cross (MC) for his actions at Greven in March 1945. During the advance by the 6th British Airborne Division to Wismar, the 3rd Parachute Brigade was ordered to secure a bridgehead over the Dortmund-Ems Canal. As A Company (A Coy) assaulted the bridge over the canal it was blown up, and A Coy came under heavy fire from a flak battery. Under command of Major Flood, A Coy established a bridgehead to attack the battery and successfully overpowered it. The MC citation stated that his assumption of control at the bridge turned the battle with important consequences for the whole operation.

Between 1945 and 1947, he became Second in Command of the 1st Parachute Battalion, in Palestine. He later returned to the UK to became a Company Commander in the 4th Parachute Battalion before attending Staff College in the UK in 1948.

Bob Flood was posted to Egypt and Jordan with the 8th Infantry Brigade as Brigade Major until 1952 when he became Company Commander of the 1st Royal Berkshire Regiment at the Royal Military Academy Sandhurst (RMAS).

After working for two years in the Chiefs of Staff Secretariat, he then joined 3 PARA as Second in Command, serving in Cyprus and Jordan.

He became Commanding Officer of Depot PARA from 1959 to 1960, before a posting to Washington, United States of America. Two years later, Bob Flood was promoted to full Colonel and returned to the UK to command the Army Air Transport Development Centre (AATDC) at RAF Old Sarum, where he was responsible for the trials of heavy equipment dropping by parachute.

Bob Flood served  as Commander of the 44th Parachute Brigade from 1965 to 1968, and then returned to RMAS as Assistant Commandant. His final appointment before retiring in 1974 was as Vice President of the Regular Commissions Board, and Commandant at Joint Air Transport Establishment (JATE) at RAF Abingdon.

Brigadier (Brig) Flood settled in a village in Wiltshire and ran the National Garden Scheme as Hon County Organiser for Wiltshire and Council. He was also a keen cricket player, throughout his youth, career and retirement.

Brigadier Bob Flood, who has died aged 84, won an MC in the field while serving with the 8th Battalion Parachute Regiment in Germany in 1945. 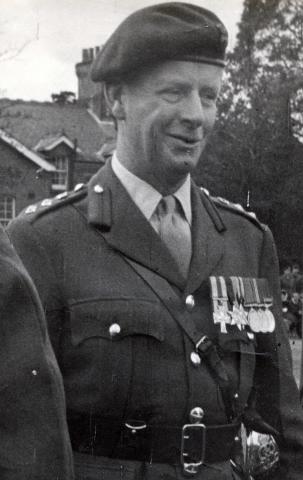