Frankie Garlick came from Mill Hill, in London, and served in the Grenadier Guards prior to volunteering for British airborne forces on its formation in the early stages of World War II.

The embryonic unit, No 2 Parachute Commando, had been redesignated as 11 SAS Battalion towards the end of 1940. The duties for the remainder of the battalion's men not selected for the first British airborne raid of the war at Tragino primarily consisted of performing demonstrations for the Central Landing Establishment during the early part of 1941.

One such demonstration took place on 17 July 1941, at RAF Abbotsinch (the present day Glasgow International Airport), with ten parachutists, including Frankie, tasked with jumping in a quick stick so as to form a close pattern on the ground in front of various VIPs.

The jump did not go according to plan, and resulted in the first recorded 'hang up' in British airborne forces history, an event which most paratroopers dread and hope never to have the misfortune of experiencing. Frankie was the hapless Para involved and was extremely fortunate to escape with his life.

Group Captain Maurice Newnham takes up the story “The Guardsman jumped correctly, but by some remarkable mischance the sharp point of the snap hook which connected his static line to the aircraft strop became caught in the canvas bag of his parachute. His exit from the hole in the floor of the Whitley was thereby abruptly halted and he found himself suspended immediately beneath the fuselage of the aircraft.”

There was no way of hauling him back in or releasing him and Frankie was left flailing in the slipstream while the aircrew frantically considered the options available.

“The pilot, Edward Cutler, was informed of the situation, and after flying around the airfield for a few minutes decided to land slowly and carefully with the tail of the aircraft held as high as possible in the air. The manoeuvre was a complete success, and as the aircraft landed the unfortunate Guardsman was dragged over the grass with the parachute on his back acting as a sled.”

Amazingly he survived the landing with only cuts and bruises, although his parachute and pack were damaged beyond repair and both heels were ripped off his boots.

When 11 SAS Battalion was reorganised as the 1st Parachute Battalion later in the year, Frankie was assigned to R Company but by 1942 had been transferred to HQ Coy into the Mortar Platoon.

Frankie was one of a small percentage of ‘the originals’ who fought all the way through from North Africa to Arnhem two years later where, as a member of HQ Coy, he was wounded in action and taken prisoner. 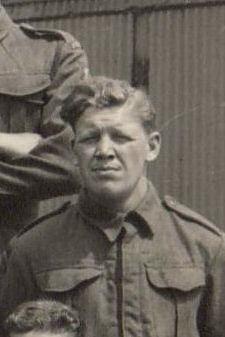