General Sir Frank King began his service with Airborne Forces during World War 2, dropping at Arnhem with the 11th Battalion, where he was wounded and captured. He went on to become Commander-in-Chief British Army of the Rhine and Commander Northern Army Group during the Cold War.

Born in 1919, Frank King was educated at Wallingford Grammar School. Having begun his studies in London to become a lawyer, war broke out and he joined the Army; nine months later, he was commissioned into the Royal Fusiliers, serving in North Africa in 1942, before transferring to The Parachute Regiment in 1943.

After the war, he qualified firstly at the Royal Military College of Science and then in 1950 at the Staff College, Camberley. There followed a long period of duty with 16 Independent Parachute Brigade Group: as a company commander with the 2nd Battalion; as GSO2 (Air) in the brigade headquarters, which included the Suez operation of 1956; and as second-in command of the 1st Battalion.

He was promoted to Lieutenant Colonel in 1958 as an Assistant Military Secretary in the Ministry of Defence, before taking command of the 2nd Battalion in the Middle East, which included operation ‘Vantage’ to deter an Iraqi invasion of Kuwait in 1961. Command of 11th Infantry Brigade Group in Minden followed this tour of duty.

There followed a series of staff appointments. During one commute to London on his motorbike, he was stopped by a policeman who apprised him of the fact that his coat was on fire – having absent-mindedly placed his (legendary) pipe in his coat pocket.

In 1969, he was appointed Commandant of the Royal Military College of Science, until his promotion to Lieutenant General in 1971. In February 1973, he was appointed to perhaps his most testing command, as GOC Northern Ireland and Director of Operations.

A qualified helicopter pilot, Frank King was Colonel Commandant of the Army Air Corps from 1974-80. He held a number of company directorships after he retired and maintained close links with The Parachute Regiment through related charities and veterans clubs. He died on 30th March 1998.

With assistance from Harvey Grenville and the Executors of General King’s Estate.

When I left the Old Vicarage I had no clear idea of where I might go. Despite Kate ter Horst' s kindness and calm I had a great urge to escape from her house.

Our battle began about 10 minutes after we got the 20 minute 'Prepare for action' call from our American crew chief.

For three months the 11th Battalion lived at almost constant alert, with no leave, continual planning and restricted access to nearby towns. 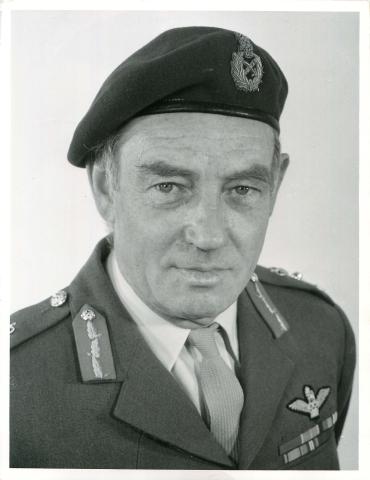