Dennis George Lashmar served in the ranks from March 1945 and commenced officer training in January 1946.

He was granted an emergency commission on 3 May 1946 after he had completed training at 161 (Infantry) (Royal Military College) Officer Cadet Training Unit.

Dennis served as a 2nd Lieutenant with The Cameronians and transferred to The Parachute Regiment in June 1946.

Dennis was promoted to War Substantive Lt in November 1946  and posted out to Palestine in March 1947, where he served with 2nd Parachute Battalion as part of 6th Airborne Division. While serving in Palestine he became friends with Vincent Davey, who was later to become Managing Director of Gus Kuhn Motors.

Dennis was placed on release leave in February 1948 and transferred to the Army Reserve in April.

In the early fifties he became the first motorbike race rider sponsored by Gus Kuhn. Sadly, Dennis was killed in the penultimate lap of the 500cc German Grand Prix at Solitude near Stuttgart in July 1954.

Further information about Dennis' racing career can be found on the Gus Kuhn Website.

Compiled by Harvey Grenville with the kind assistance of Mark Lashmar 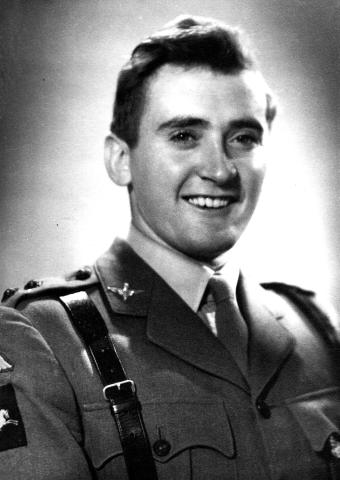