Dair Farrar-Hockley was commissioned in 1967, after training at RMA Sandhurst, and posted to 3 PARA. Service in UK and Malta led to training in Cyprus and Libya, concluding with the operation to protect a peaceful withdrawal of UK assets following the overthrow of King Idris in 1969.

A year in Northern Ireland as ADC to Commander Land Forces was followed by a two year posting to train recruits at Depot PARA. In 1973 he moved to 2 PARA: first as air adjutant, then adjutant and finally OC Ptls Coy.

After a year at Staff College in 1978, he served as brigade major with the Berlin Infantry Brigade before returning to British shores to command A Coy 2 PARA. Training in UK, Denmark and latterly Kenya prepared the battalion for Operation CORPORATE in 1982.  Here A Coy played its part in the successful operation to capture Darwin and Goose Green, the coup de main operation to secure Bluff Cove and the battle for Wireless Ridge, before leading the way into Port Stanley.

Next, service on the multi-national staff at SHAPE led to a return to the Staff College for a year as an instructor. Command of 3 PARA followed in 1985, with extensive training for a variety of roles in the UK and USA. The recce to Fort Lewis, close to Seattle in Washington State, forged a relationship with 2nd US Ranger Battalion, with whom we later trained extensively in the mountains astride the Columbia river after parachuting into the area. In 1987, the battalion was selected to take part in Exercise Hadrian’s Wall — a month long exercise to test the concept of a parachute battalion supporting SF operations for which the battalion was deemed fit for role. Please see document here.

In the autumn of 1987, he again went to SHAPE to be SACEUR’s briefer. He then spent eight months as a Service Fellow at King’s College, London, writing a thesis on ‘Future Instability in the Mediterranean Basin’ which highlighted the likely migratory pressures upon western Europe in the future. He then took command of 19th Infantry Brigade in Colchester.

Following a year at RCDS, he was posted to Warminster as Commander Infantry Training in order to restructure the training base.  In 1995 he was sent, in a newly created post, to work for the Czech Chief of Defence to assist in the development of a new security strategy and the subsequent reorganisation of their armed forces in preparation for entry into NATO.

His final post in the army was as GOC 2nd Division based in York, which included organising the first major exercise for the TA in a decade, with the added involvement of both Czech and Polish forces.

Between 1999-2006, he worked as director general of the Chartered Institute of Arbitrators, helping to develop it into a global body; after which he worked as a consultant to a New York law firm in the same field until 2010. He is currently a senior fellow at The Institute for Statecraft, a patron of The Second World War Experience Centre, and a trustee of Holy Trinity Monastery in Herefordshire.

Since 1998, as chairman of the Airborne Forces Museum and later also as chairman of the Appeal Board, he led the trustees and fundraising team in the development of ‘Airborne Assault’ and its collaborative partnership with the Imperial War Museum at Duxford, until its formal opening by HRH The Prince of Wales in 2008. 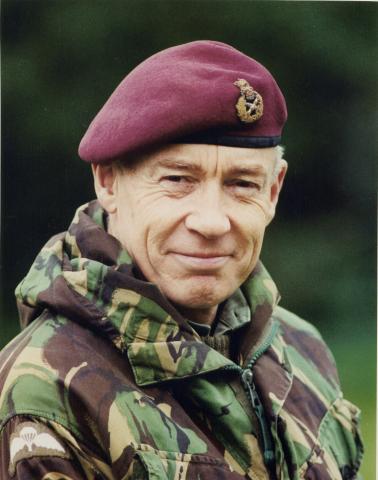