Since September 2010, Major-General Chapman has been the Senior British Military Advisor to US Central Command.

Major-General Chapman joined the British Army in September 1980 after sponsorship at Lancaster University. He was the only army student to achieve a first class honours degree in his year.

He joined 2nd Battalion, The Parachute Regiment (2 PARA) and fought in the Falklands campaign, including the Battle of Goose Green. He stayed with 2 PARA until May 1985 which included his first Northern Ireland (NI) tour in South Armagh.

He was as an instructor on the Platoon Commander's Division before returning to 2 PARA as the Adjutant. In 1989-90 he served on exchange with the Canadian Airborne Regiment prior to attending UK Staff College at Camberley in 1991. On graduation he became Chief of Staff 5 Airborne Brigade.

In 1994 he returned to 2 PARA as a company commander for an 18 month operational tour in Belfast, prior to becoming 2IC 1 PARA and was promoted to Lt Col in March 1996.

He served on the directing staff at both the British Army Staff College and the UK Joint Services Command and Staff College.

In July 1998 he became SO1 Operations in NI, and went on to command 2 PARA from August 1999-December 2001. His tour as CO included a NI reinforcement tour and the weapons collection mission (OP BESSEMER) in Macedonia.

He was promoted to Colonel in December 2001 and appointed Colonel Military Operations 2 in the MoD (dealing with Counter Terrorism).

As a Brigadier, he commanded 19 Mech Bde from 2003-2005, prior to becoming the last COS in NI (his fifth NI tour). In this role he planned the conclusion of the 38 year OP BANNER (the UK NI operation). He was Head of Counter Terrorism and UK Operations in the MoD from 2007-2010.

He is married to Geinor with 2 children – Rosie and Tom. 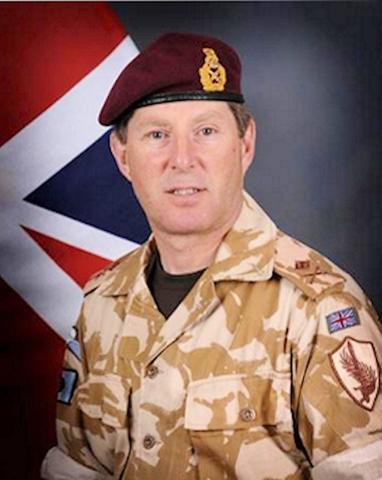