Charles Frederick Howard 'Freddie' Gough was born in India in September 1901, and was one of a number of Airborne soldiers who served in and survived both the First and Second World Wars.

He was educated at Cheam School and later the Royal Naval Colleges at Osborne and Dartmouth. From 1917 he served as Midshipman on HMS Raillies and later HMS Witherington until the end of the war.

In 1920 he left the Navy and went back to India but only stayed two years, coming back to England to become an underwriting member of Lloyds. He soon became very interested in the Territorial Army and in 1924 joined the London Rifle Brigade, serving until 1929 when he left and was listed on the Territorial Army Reserve of Officers. He married Babara Pegler the same year, and they later had a son and daughter.

With the Second World War looming, he rejoined the London Rifle Brigade in April 1939. When war broke out, he volunteered to take part in the fighting in Finland against Russia. He was a member of the famous 5th Battalion Ascots Guards formed for skiing duties in Finland. He was soon afterwards at GHQ in France and escaped Northwest Europe in the mass evacuation at Dunkirk, and received a Mention in Despatches shortly afterwards.

On returning to the UK, he soon began his Airborne career, joining the 1st Airborne Division Reconnaissance Squadron as Officer Commanding. He went on to take the Squadron to North Africa in April 1943 to prepare for the invasion of Italy, where he was awarded the Military Cross. After a brief return to the UK in the Spring-Summer of 1944, he took part in the Battle of Arnhem with the Squadron. He was taken Prisoner of War at the Bridge and was held captive for over six months before escaping in April 1945, linking up with US troops in Bavaria.

At the end of the war he was demobbed, and made an appearance in Theirs Is The Glory (1946), the first film to portray the Battle of Arnhem which was cast entirely from men who served during the conflict. He later rejoined the Territorial Army in February 1947 to become the Commanding Officer of the newly-raised 11th Parachute Battalion (TA), then part of 16th Airborne Division (TA).

In October 1951 he became the Member of Parliament for Horsham consituency and proved to be an able and industrious member of the House, taking particular interest in the fortunes of ex-servicemen. He was also a Trustee of the Airborne Forces Security Fund (ABSF).

He was made Hon Colonel of the 641 Heavy Anti-Aircraft Regiment Royal Artillery (TA) and of the Sussex Yeomanry from 1959 to 1963, and later became Hon Colonel of 16th (Volunteer) Independent Company, the Parachute Regiment.

Freddie Gough died on holiday in Sorento, Italy on 19 September 1977, aged 76 years old. Fatefully, this was 33 years to the day he had taken part in the actions around the Bridge at Arnhem. He is buried in Italy.

With thanks to Pip Tyler 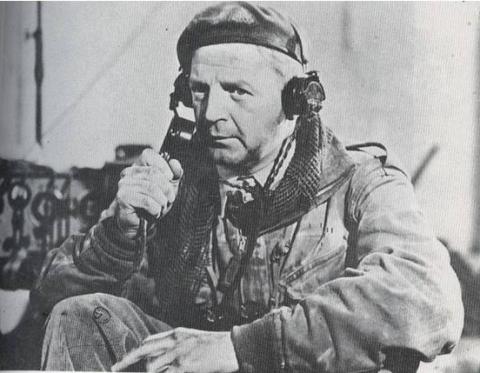