Private Archibald Donaldson 'Archie' Aitken was the son of John and Rachel Aitken, of Falkirk, Stirlingshire.

He volunteered for airborne forces while serving with the Royal Artillery during World War II and qualified as a military parachutist on course 123 which ran at RAF Ringway in July 1944.Tragically, three members of this course, who were posted to 7th (Light Infantry) Parachute Battalion as reinforcements,including Archie Aitken, were all later killed together in the explosion at Neustadt bridge.

After qualifying Pte Aitken joined the 7th (Light Infantry) Battalion as a reinforcement, serving with B Company HQ, and fought in the campaigns to liberate North West Europe from German occupation including the final mass allied parachute and glider assault of World War II, Operation Varsity, on 24 March 1945.

The battalion proceeded on to its main task, to secure Neustadt and the river crossing. Both A and C Coys entered the town without opposition and Bn HQ was soon established in a suitable house.  Meanwhile, the men of B Coy had been working up the river to the bridge but were forced to deviate within 400 yds of their objective, which took them onto the main east-west road through Neustadt and left them with both the loop canal bridge and main bridge to cross.

B Coy encountered a civilian soon after coming on to the road and Major Reid, the officer commanding B Coy, questioned him about the bridge and garrison.  The civilian said the bridge was prepared for demolition and stressed the need for speed if it was to be captured intact.  This confirmed Major Reid's original plan, which was to rush the bridge and trust to getting across in time to prevent it going up.

He ordered his men to charge and the two advance platoons under Lt Gush (5 Pl) and Sgt McIvor (4 Pl), and led by the Coy 2IC Capt Woodman, had crossed both bridges when the first arch of the main bridge was blown behind them at approximately 0015 hrs 8 April.  Heavy and severe casualties were suffered by the troops on both sides of the explosion but the small party that got across completely routed the garrison and held their small bridgehead all night.  In the morning, men from A Coy traversed the river in boats to relieve the men who had made it across the bridge.

The battalion war diary records the day's casualties as 27 killed, 33 wounded and 6 missing presumed killed; mostly from B Coy. Some of those injured also died as a result of their wounds.

B Coy HQ, No 5 Platoon and No 4 Platoon bore the brunt of the casualties at the bridge, including Pte Aitken who was killed as a result of the bridge detonation.

Pte Aitken died on the night of  7/8 April 1945, aged 20 years, and was given a field burial next to the bridge along with the other members of B Coy who were killed. He is now buried at Becklingen War Cemetery overlooking Luneberg Heath, Germany. 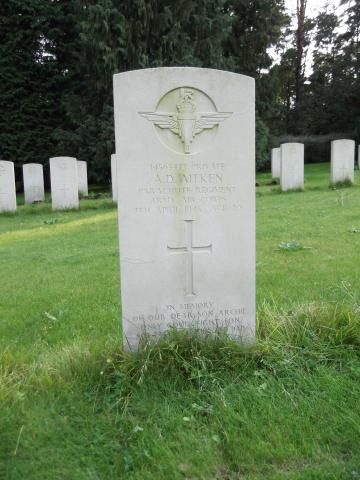